Iran is Running Out of Water 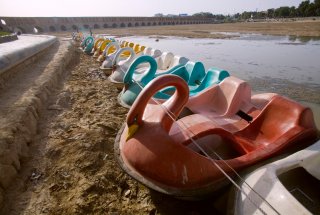 Salt storms are an emerging threat for millions of people in north-western Iran, thanks to the catastrophe of Lake Urmia. Once one of the world’s largest salt lakes, and still the country’s largest lake, Urmia is now barely a tenth of its former size.

As the waters recede, extensive salt marshes are left exposed to the wind. These storms are getting saltier and are now happening more often – even in the cold and rainy seasons of the year. As more drying uncovers more salt marshes, things will only get worse.

Salt storms pose a direct threat to the respiratory health and eyesight of at least 4 million people living in both rural and urban areas around Lake Urmia. Increasing soil salinity reduces the yield of agricultural and orchard crops grown around the lake, while the lake has shrunk so much that boating is no longer possible, resulting in a loss of tourism.

This dramatic decline is down to human activity. Over the past three decades, Iran has followed a succession of five-year economic development plans, part of which involved providing large government loans for the agricultural sector to expand and switch from being primarily rain-fed to irrigated. To provide the necessary water for the farms, as well as for growing domestic and industrial use, more than 50 dams were constructed on rivers that drain much of north-western Iran and flow into the lake.

While these dams siphoned off the water that once fed the lake, the drying process was intensified by climate change. The rate of rainfall has reduced in recent decades and the Urmia basin has experienced several multi-year droughts.

All this has left a massively shrunken lake and a host of associated economic, social and health impacts. Yet what’s happening with Lake Urmia is just one example of water-environmental problems emerging right across Iran.

Iran is Getting Warmer and Drier

In a recent journal article, we examined how both climate change and human activity had affected hydrological changes in Iran in recent decades. The country has 30 main river basins, and we gathered three decades of key hydro-climatic data for each, including surface temperature, precipitation, how much water was stored underground in soil and rock, surface runoff (the amount of excess rainwater that cannot be absorbed by the soil), and measures of evaporation and transpiration from plants.

We then calculated the average values of each of these variables over two 15-year periods, 1986-2001 and 2002-2016, and compared the two. This allowed us to see what was changing in each of these basins and by how much.

Our work showed that Iran’s main river basins have got warmer but are receiving less precipitation, are storing less water underground, and seeing less runoff.

Some river basins where precipitation and runoff decreased still saw an increase in evapotranspiration (the sum of evaporation and plant transpiration). This may seem odd at first, as less rainwater surely means there is less water to evaporate or for plants to transpire. Lake Urmia, for instance, is an endorheic basin, which means nothing flows out of it and all water that flows in eventually evaporates (this is why the lake is salty). But why would evapotranspiration have actually increased, even as the basin is fed by less water?

This is actually an indicator of human activity. First, all those dams generally increase the surface area of the body of water, compared to the natural flow before the dam was built. Artificial lakes and reservoirs, therefore, leave more water exposed to air and direct sunlight, thus increasing evaporation.

But it’s also down to farming. As more crops are grown, more water is transpired by plants – and more water is needed to grow those plants. To add water where needed, farmers have turned to groundwater and large-scale water transfer engineering projects.

This use of water to maintain and expand human activities is unsustainable and has serious environmental and socio-economic consequences, particularly in this dry part of the world, as seen by changes to Lake Urmia. Policymakers need to mitigate the adverse hydrological changes and associated socio-economic, environmental and health impacts, and move towards something more sustainable.