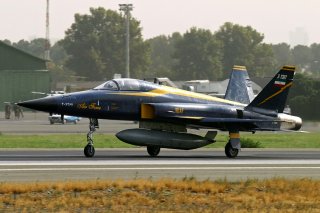 Here's What You Need to Remember: The irony is that Tehran doesn’t need to be ashamed of its resourceful use of old jet fighters. In the nine-year-long Iran-Iraq war during the 1980s, Iranian fighter pilots fought one of the most intense air wars in recent history defending their home soil.

Sébastien Roblin holds a Master’s Degree in Conflict Resolution from Georgetown University and served as a university instructor for the Peace Corps in China. He has also worked in education, editing, and refugee resettlement in France and the United States. He currently writes on security and military history for War Is Boring. This first appeared earlier in the year.

In the Iran-Iraq War, F-5s and MiG-21s Fought to a Standstill