An Iranian Navy Ship Burst Into Flames: Is Israel to Blame? 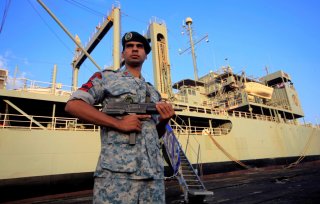 The Iranian Navy announced on Wednesday that the IS Kharg caught on fire near the port of Jask in South Iran. The military tried for twenty hours to extinguish the fire, which reportedly began in the engine room and proliferated to other parts of the ship. The blaze started in the early morning; first responders managed to rescue the entire four-hundred-strong crew, though there were dozens of reported injuries. “A 20-hour effort to extinguish the fire by the ship’s damage-control team, which were joined by firefighting crews as well as military and civilian forces from other nearby vessels, failed to save Kharg,” according to a spokesman for the Iranian Navy.

The Kharg was apparently several days into an unspecified “training mission” at the time of the fire. The Ol-class fleet replenishment oiler is among Iran’s most important support ships. Its loss is widely interpreted as a major blow to the smooth functioning of Iran’s maritime logistics chains, while also hampering the ability of Iranian frigates to operate for prolonged periods without undergoing maintenance at ports. Still, the full extent of the consequences of Kharg’s sinking is yet to be assessed. Tehran has not shared any plans to salvage the ship, nor has it discussed how Iran’s navy plans to recover from the loss. The navy’s recently-converted commercial tanker Makran shares some overlapping capabilities with the Kharg, but cannot be considered a one-to-one replacement.

The fourth and last remaining Ol-class tanker, Kharg was built in the United Kingdom and delivered to Iran’s Navy in 1984. The ship is over 207 meters long and displaces at just under 34,000 tons at full load, boasting several modifications in comparison to its British Ol-class counterparts. Aside from being one of the few vessels in Iran’s navy capable of providing replenishment to other ships, the Kharg can also carry three helicopters.

A spokesman for the Iranian navy said that the cause of the fire is being investigated, with a statement to follow soon. The incident follows a chain of disasters for Iran’s navy in recent years. Last year, an accidental missile discharge from an unidentified vessel near Jask struck a Hendijan-class support ship. Officials initially said one sailor was killed by the blast, but the count quickly ballooned to nineteen sailors dead and fifteen more wounded. In 2018, the destroyer Damavand sank in the Caspian Sea after colliding with a pier, killing two sailors.

The fire comes amid a flurry of reciprocal accusations between Tehran and Jerusalem, with the former accusing Israel of targeting a ship belonging to Iran’s paramilitary Islamic Revolutionary Guard Corps (IRGC) in April. Last month, Tehran said that Israel’s military struck an Iranian freighter delivering oil to the Syrian port of Latakia with a missile. Local officials have not yet labeled the sinking of the Kharg as an act of external sabotage, with one cautioning that it is too early to draw conclusions. “The only thing we can say is that a fire started inside the ship. In that sense, it looks different from the others,” they added.