Iraq in the Crosshairs: Why America and Iran are Fighting Over Baghdad 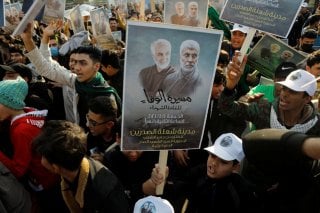 Here's What You Need to Remember: The embassy complex was built for a day when the United States had a one-hundred-thousand-strong army in Iraq and functioned as something of a shadow amalgamation of every Iraqi government ministry rolled into one. It can be downsized territorially, but there is a limit to how much manpower the United States will save by slicing off chunks of its land.

The end of the War on Terror, as suggested by the near-simultaneous resignations of ISIS coordinators at the State Department and Defense Department, is something of the end of an era.  For nearly two decades the United States has been at war with various shades of Sunni militants from Al Qaeda to the Afghan Taliban. During most of this time the heart of the fight, per the Bush administration, was in Iraq, and particularly the sprawling, 104-acre U.S. Embassy compound that served as the political face of an occupying army. With that army gone, it is no less critical.

The main American challenge in the Middle East for the foreseeable future will be, as it was under the Trump administration, stabilizing the Gulf States and their allies against Iranian power which in a vacuum would overwhelm them and allow Iran to dominate the Persian Gulf.  The basic strategic problem is that Iran and its allies have become stronger than their primarily Sunni Arab opponents, thanks to a sequence of geopolitical events beginning with the fall of the Taliban. They have more people, more effective combat power, and greater deterrence. The unprecedented introduction of Russian combat power in the region on the side of Iran only made them more formidable. Left alone, this amalgamation of states could gradually induce the Gulf States and particularly Saudi Arabia to quietly accommodate Iranian wishes: in a worst-case scenario, permitting it to dominate the Persian Gulf and thus the price of oil, making Iran a great power.

The power of Iran’s coalition rests on its influence in Iraq. Without Iraq, Iran is effectively isolated, its population and even its military advantages largely scratched. With an allied Iraq, it far outclasses its regional opponents. Critically for the United States, it does not yet have full control of Iraq. It has tactical and operational control of certain outcomes: for example, trafficking missiles through the eastern border westwards towards Syria, and the ability to attack U.S. facilities. The Iraqi political class is also conscious of and reacts to perceived Iranian threats. But at the strategic level, Iran has wanted the United States and its forces out of Iraq for a decade and a half and has not gotten it, militia groups and missiles be damned.

Iraq is thus the main battleground for Iranian political influence. It is contested in a way that Lebanon with Hezbollah is not. It is the only place where the United States is politically on offense against Iranian power, with few advantages, and it is hard. Counter-Iran policy, for the most part, is not hard. Everyone likes announcing new sanctions on Iran. Everyone likes condemning whatever terrible thing the Islamic Republic is doing and conferring with allied monarchs in luxury. But far fewer people actually want to get into the political weeds and fight out America’s interests in the Iraqi parliament: finessing, cajoling, and occasionally threatening political actors, often walking out of a meeting as the Iranians are walking in.

The transfer of mission from counter-Sunni, basically, to counter-Iran in the U.S. government has had a significant impact on the type of military actions and diplomacy that is practiced, making the Embassy even more critical. There is less need for diplomats to travel into the hinterlands to meet village elders. That has been replaced in Iraq and other Shia areas by engaging with politicians who are constantly assessing the costs and benefits of siding with the Iranians versus siding with America. Major Shia politicians may not love the Iranians but they perceive the Iranians provide the certainty of a tactical payoff. They, or their proxies, will bribe you or kill you. America’s tools are less acute and thus its payoffs far less certain, even if, ceteris parabis, the ministers of parliament from Diyala might prefer us at the end of the day.

The U.S. Embassy is a tool in this fight. It is perhaps our best one. It is one of the few remaining symbols in Iraq of America as superpower. The embassy complex was built for a day when the United States had a one-hundred-thousand-strong army in Iraq and functioned as something of a shadow amalgamation of every Iraqi government ministry rolled into one. It can be downsized territorially, but there is a limit to how much manpower the United States will save by slicing off chunks of its land. Reporting staff are already relatively few, and as long as the Embassy needs a security perimeter the manpower reductions that can be achieved by downsizing the facility are minimal. Even the downsizing is restricted by the nature of the competitive environment: as long as Iraq’s fire department is not fully reliable, for example, the embassy will need its own fire department, no matter how many city blocks it takes up.

In any case, Embassy Bagdad is safer now than it has been at any point since the United States invaded Iraq. Its countermeasures and Iraqi commitment to its safety have increased. Critically, the domestic political cost of attacking the embassy has also increased, dramatically. The threat from Shia militants has also declined from the heyday of the Mahdi Army battles in 2007, though it will never go away, not without also taking away this zero-sum quasi-sectarian balance of power that dominates strategic life in the Gulf.

This, then, is the main reason to keep the embassy open and keep it—if not imperial—then perhaps imposingly neoclassical. Not because our diplomats want to serve there, in the fight, though they do. Not because their personal risk is much lower than in the past, though it is. But because it is one of the most valuable chips in the most valuable piece on the board of the region. The Iranians know it and the Iraqis know it. Our leaders should too.

Andrew Peek is a nonresident fellow at the Atlantic Council. He was previously the Senior Director for European and Russian Affairs at the National Security Council and the Deputy Assistant Secretary for Iran and Iraq at the U.S. Department of State’s Bureau of Near Eastern Affairs. This article first appeared in December 2020.