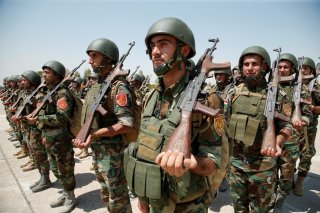 Here's What You Need to Remember: Although ISIS was territorially defeated within Iraq in 2017, cells of the group’s adherents remain and have carried out  traditional terror tactics. The Peshmerga are favorite targets of the group.

The attack, which took place in the northern Diyala province, consisted of a combined roadside bomb and sniper ambush. After the bomb detonated underneath a passing Peshmerga convoy, ISIS snipers opened fire on relief forces coming to the convoy’s aid.

“I am deeply saddened by the news of the martyrdom of a group of Peshmerga heroes last night while they were providing assistance to their colleagues,” KRG President Nechirvan Barzani, nephew of Kurdish leader Masoud Barzani, announced in a statement. Barzani noted that the proliferation of the Islamic State’s atrocities “is a new and terrifying message, and brings a serious threat to the region.”

In response to the incident, Barzani called for greater integration and cooperation between the Peshmerga and the Iraqi Army, which has often attempted to constrain their role in post-ISIS Iraq.

In the summer of 2014, as the corrupt and demoralized Iraqi Army collapsed in the face of ISIS attacks in western and central Iraq, rapidly organized Peshmerga units found themselves on the front lines against the terror group. With support from the United States, the Peshmerga won a series of early victories against ISIS, checking its advance in the north. After ISIS was forced to retreat, the Kurds came to clash politically, though rarely violently, with the central leadership in Baghdad and the country’s Shi’a militias. Dozens were killed after the major northern city of Kirkuk, which Kurdish forces captured from ISIS and held for itself, was recaptured by the Iraqi Army in October 2017.

A major point of contention has been the status of Kurdistan. Although it is officially an autonomous region within Iraq and has enjoyed de facto independence from Baghdad in most respects since 1991, the central Iraqi government has strongly opposed Kurdish attempts to make their independence explicit. Iran, Syria, and particularly Turkey have also opposed Kurdish independence, as each nation has its own Kurdish population who could be inclined to pursue a similar secession.

Although ISIS was territorially defeated within Iraq in 2017, cells of the group’s adherents remain and have reverted from attempts to capture and maintain territory to more traditional terror tactics. The Peshmerga are favorite targets of the group; two of its fighters were killed in Kirkuk in October in an ISIS-linked attack. In the same month, the group also killed roughly a dozen civilians in Diyala, stoking fears of renewed sectarian tensions.