Israel Is Building a New "Iron Dome" for Its Navy 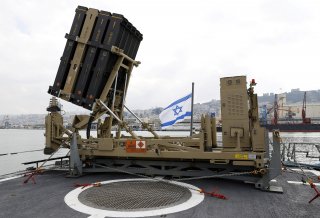 Here's What You Need To Remember: In recent years, Israel has invested heavily in new technology for ship defense, with an eye towards protecting Israeli ships above and below the water.

Israel’s need to confront threats at sea, especially amid rising tensions in the Eastern Mediterranean, has led the country to improve its naval assets over the years. That has meant new submarine orders and a new class of Sa’ar 6 corvette. Much of Israel’s naval technology is kept under wraps by the country, lest enemies get a sense of how Israel’s multi-layered capabilities work. Israel’s defenses knit together its fifth-generation F-35 stealth fighters with air, naval and ground force advances. However, some of Israel’s advances were on display at the recent Euro Naval 2020 exhibition.

For starter’s Israel Aerospace Industries Elta subsidiary announced a collaboration with Hensoldt, a company that makes sensors in Germany. The two companies have built an Integrated Communication and Surveillance system for submarines. This is basically a mast that sits atop the submarine, like one is familiar with in movies where people look through periscopes. Today’s submarines are festooned with different communications masts and sensors, all of which make them a bit less stealthy than submariners would want their subs to be. Israel’s Elta says this new mast combines Hensoldt’s existing OMS150 mast with Elta’s SIGINT and SATCOM payloads.

The new concept of submarine warfare envisions the submarine as part of a task force, not out there listening and hunting alone. “The demand is now for submarines to perform optical surveillance capability day and night and in all weather conditions, monitor radar and communication transmissions, and intelligence gathering,” Elta’s statement said.

The resulting intelligence is sent through a secure tactical communication to a remote command. These requirements have driven navies to procure more intelligence, surveillance, and reconnaissance (ISR) sensors and high-reliability communication systems. Typically, the sensors and communication systems would have to be installed on multiple masts, but ICS houses all the sensors within a single uniquely engineered mast to minimize the impact on the submarine’s stealth signature. “Providing a single integrated mast solution will truly satisfy our customers who are searching to enhance their submarines’ capabilities while being sensitive to the limited amount of space available and retaining a high degree of stealthiness,” said Director Sales of Hensoldt Optronics Maritime, Harald Hansen.

For above the water Israel is also showing off some new technology from Rafael Advanced Defense Systems. Together IAI and Rafael are two of Israel’s largest defense companies, the third being Elbit Systems. Rafael calls its defenses for ships part of a 360-degree multi-layered suite for what naval ships need today. “Based upon years of experience and deep operational know-how in various naval arenas and scenarios, and integrating combat-proven technologies in all domains, we maintain our efforts in bringing leading technologies and solutions to provide naval forces defense superiority against all modern naval threats above and below the waves, such as naval area defense, swarm attack defense, and torpedo defense,” a Rafael statement said.

Their weapons systems give a sense of the types of threats ships face today. Gone is the era of large surface battleships, but navies around the world are trying to figure out the right mix for what they need today. The United States, for instance, went through a tortuous process building Littoral Combat Ships and Zumwalt-class destroyers, the latter of which were supposed to be a class of navy guided-missile destroyers that combine multi-mission stealth technology. Now U.S. Navy bureaucrats are aiming for a 500-ship navy that will have unmanned ships and other new technology. Washington must act fast because China’s navy is rapidly expanding. Major drills with Japan and Australia and other nations are part of America’s attempt to salvage its naval power in the face of these threats. Similarly, U.S. Secretary of State Mike Pompeo’s recent visit to India to discuss a defense pact, is part of the process.

Navies all around the world are increasing. This looks like a new naval arms race, similar to before the First World War between Imperial Germany and the British Empire. Today, Turkey and Greece are facing off in the Mediterranean and navies clash in the Persian Gulf and Asia.

Israel, with a small surface fleet, uses its navy to protect exclusive economic zones and also to project power beyond its borders. In the past Israel has been surprised by the anti-ship capabilities of groups like Hezbollah. Towards that end a variety of new systems have come online. For example, Israel tested its LORA missile against naval targets this years. Rafael also has a new counter-drone solution for its Typhoon Remote Weapon Station. It has also packed the system with more ammunition to be able to contend with the prospect of drone swarm threats.

In addition, Rafael has been showing off its Naval Spike ER and NLOS missiles with a range that now reaches thirty-two kilometers for the latter. That can help with precision strikes against other ships or against land targets. The Spike missile system has been acquired by more than two dozen countries ground forces and is a major player in Europe and elsewhere. The missile is fired from a turret on a ship that can hold numerous munitions and the missiles have the latest artificial intelligence and scene matching automatic target recognition technology that aids in precision attacks.

To defend ships Rafael showed off its C-GEM at Euro Naval 2020. This was designed to deceive advanced seekers of anti-ship missiles. It uses algorithms and a rocket launched from the combat vessel to create a target to deceive the incoming missile. In addition, below the water the Israeli company’s technology can stop torpedoes using its Torbuster fourth-generation decoy. It is the first operational active operational hard-kill torpedo defense counter-measure.

Overall the need to defend ships, with systems like Israel’s Iron Dome, which can now be deployed at sea, and the need to pinpoint accuracy at long distances against enemies, is part of the puzzle naval commanders face. They need to have submarines with the latest technology on their masts to be able to communicate and they need to stop potential drone swarms of the kind the Iranians are building. The world hasn’t seen a major clash at sea for years, but when it comes Israel hopes its technology will be at the forefront. Like with most things Israel makes, it doesn’t make the big heavy ships, but rather all the add-ons that surround the ship with a defensive shield and provide it with lethality against enemies.