Israel May Have to Live With Iran's Nuclear Weapons 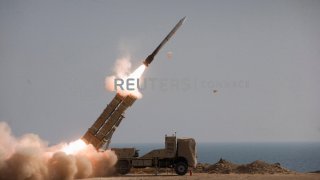 In 1977, Israel’s deputy prime minister, Yigael Yadin, asked Egyptian President Anwar el-Sadat, who was on his historic trip to Jerusalem, why the Egyptian army had not proceeded to the Sinai passes during the 1973 Yom Kippur War. ‘You have nuclear arms, haven’t you heard,’ was Sadat’s reply.

Of course, Israel’s nuclear capabilities were the stuff of rumour. To this day, Israel has never officially confirmed the existence of a nuclear program. Yet Israel’s worst-kept secret has long shaped the region’s politics, including by deterring its enemies. But can it deter Iran?

In 1967, David Ben-Gurion, Israel’s first prime minister, and Shimon Peres, who would later serve as both prime minister and president, argued for Israel to test a primitive nuclear device, in order to deter an Egyptian attack. At the time, Israel was virtually on its own in a hostile neighbourhood. France—which had been its main arms supplier—had recently deserted it, and Israel had not yet achieved its current strategic intimacy with the United States. Ben-Gurion’s position reflected his view that Israel was an intrinsically fragile entity surrounded by mortal enemies with which war was inadvisable absent the backing of a major foreign power.

Nearly half a century later, Israel has fewer enemies in the region, having made peace with several of its neighbours. But it has gained a powerful new one in Iran, since that country’s 1979 Islamic revolution. And some are arguing that in order to deter Iran from pursuing its nuclear program, Israel should abandon its policy of ‘nuclear opacity’.

But if Israel announces its capabilities and Iran persists in its nuclear drive anyway, would Israel really mount a nuclear response against what is clearly a strategic challenge but certainly not an existential threat? Moreover, Israel’s acknowledgement of its nuclear arsenal might lend legitimacy to Iran’s own quest for nuclear weapons and encourage other regional powers, such as Egypt, Saudi Arabia and Turkey, to follow suit.

The risks are apocalyptic. The kind of mutual deterrence that existed during the Cold War, or even today in the binary India–Pakistan conflict, would not work in the Middle East, a dysfunctional region where non-state actors and unstable regimes abound.

Iran has been dogged in its nuclear efforts. It has endured years of crippling economic sanctions, ultra-sophisticated Israeli cyber warfare against its strategic infrastructure, assassinations of its nuclear scientists, and attacks on its military targets across the Middle East.

Yet Iran is now closer than ever to mastering the full nuclear fuel cycle. It has also managed to maintain its proxy armies throughout the Middle East, and to extend its strategic influence from Yemen through Iraq and Syria to Lebanon.

Israel’s ‘Begin doctrine’—a counter-proliferation policy focused on using pre-emptive strikes to halt potential enemies’ development of weapons of mass destruction—will not stop Iran. A decade ago, Israel spent billions of dollars on preparations for a massive strike on Iran’s nuclear installations. But that strike never materialised.

Israeli air strikes did destroy Iraq’s Osirak nuclear reactor in 1981 and a similar installation in Syria in 2007. But those were surgical operations. Using air strikes to destroy Iran’s well-dispersed, well-camouflaged and well-protected nuclear installations is unrealistic, and the effort would almost certainly lead to a major war.

While Israel’s military capabilities are unmatched by any other Middle Eastern power, it would still face serious threats. Iran would certainly respond to an attack on its nuclear installations by retaliating against Israeli targets, and perhaps against the countries that allowed Israel to use their airspace to reach Iran.

Meanwhile, Iran’s Lebanese proxy, Hezbollah, would begin to deploy its 150,000 missiles and rockets, which can reach every corner of Israel. Israel’s vulnerable home front, and possibly some of its vital infrastructure, would be hit hard before its air force neutralised Hezbollah—likely razing Lebanon in the process.

An international agreement is probably Israel’s—and the world’s—best hope for preventing Iran from becoming a nuclear power. But while that is precisely what negotiators are currently attempting to achieve in Vienna, Iran has taken a tough bargaining position.

That is not entirely unjustified. After all, it was the United States (with Israel’s complicity) that withdrew unilaterally from the 2015 nuclear agreement in 2018, even though Iran had not violated its obligations. And Europe failed to keep its promise to help Iran bypass the sanctions the US subsequently reimposed. Furthermore, Iran’s interlocutors in Vienna—the countries that are preaching against proliferation—are mostly nuclear powers themselves.

This perceived hypocrisy likely reinforces Iranian leaders’ belief that the real danger lies in not developing nuclear weapons. If Ukraine had not surrendered its Soviet-era nuclear arsenal (then the world’s third largest) in 1994, in exchange for American assurances that Russia would respect its sovereignty, it might still have Crimea, and it might not be watching with concern as Russian troops mass on its border. Likewise, a nuclear-armed Iraq would not have been attacked by the US and its allies in 2003. North Korea’s nuclear capabilities have so far kept it immune from such an attack.

With this in mind, Iran’s leaders might be thinking like Pakistani Prime Minister Zulfikar Ali Bhutto was 50 years ago. Pakistanis, Bhutto declared, would ‘eat grass, even go hungry’ if that is what it took to develop their own nuclear bomb.

The talks in Vienna can still lead to an agreement. But, with Iran’s leaders largely convinced that a nuclear weapon is their best protection, the only durable way to prevent Iran from mastering the enrichment cycle and, ultimately, building an operational nuclear weapon probably lies in regime change. This was the position of key intelligence authorities in Israel a generation ago, when Iran’s nuclear program was still in its infancy. Given how resilient the Islamic Republic has proven to be, it seems that the world may well eventually have to tolerate an Iranian nuclear bomb, just as it has learned to live with the Indian and Pakistani arsenals.