It’s Time to Clean Up the U.S. Navy’s Image Problem 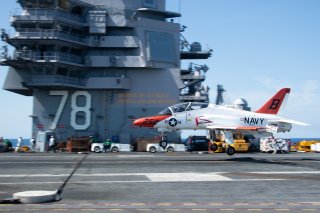 Here's What You Need to Remember: Image mismanagement, then, wrongfoots American seafarers for peacetime strategic competition, when perceptions—rather than missiles slamming into hulls—distinguish victors from vanquished. The navy must solve its material problems, lest it underperform its potential in the critical theater—the popular mind.

This represents a question of utmost moment for the U.S. Navy, which is clinging to its maritime supremacy in the face of challengers on the make.

The victor in strategic competition triumphs by impressing important audiences—by making them believers in its combat prowess relative to its rivals. Prospective foes blanch from a trial of arms against a palpably stronger force. Allies and friends take heart when backed by such a force. Third parties flock to likely winners and shun likely losers in times of trouble. Constituents back home accept risk when their armed forces are the odds-on favorite in martial enterprises.

Impressions count—in naval warfare as in our mamas’ folk wisdom. Fighting ships, warplanes, armaments, and crews are political implements. If battle tests the combatants’ fighting power in wartime, important audiences’ estimate of who’s who decides the outcome of a peacetime showdown. Whichever contender observers think would have won in combat wins in peacetime.

And, perversely, it matters little whether laymen’s impressions are accurate or inaccurate, just or unjust. A weaker but imposing-looking force could emerge triumphant from an encounter in an embattled expanse such as, say, the South China Sea. Make believers of elites and ordinary folk and you shall go far. Leave them doubting and your political efficacy suffers. Lose the war of perceptions and you risk losing out altogether.

Which brings us back to the U.S. Navy—an armed force bedeviled by an image problem. Engineering woes have sidelined newfangled warships in recent months, casting doubt on shipbuilders’ manufacturing practices, maintenance and training in the fleet, and the basic design philosophies underlying frontline combatants. The navy’s prospects for deterring or coercing foes while reassuring friends will suffer should the impression take hold that American sailors and warships are unequal to workaday functions—let alone to the rigors of high-seas combat.

Think about the travails the fleet has endured. Trouble has struck the navy’s littoral combat ships (LCS) especially hard. Last month, mere days after being commissioned, the LCS USS Montgomery suffered a seawater leak and a casualty to one of her gas-turbine engines on the same day while transiting the Caribbean Sea. The vessel put into Mayport, Florida for repairs. For good measure, Montgomery collided with a tugboat while exiting Mayport ahead of Hurricane Matthew—opening up a seam in her hull above the waterline.

Montgomery’s misfortunes represent only the latest in a series of equipment and human failures on board the littoral combatants. So bad have things gotten that Vice Admiral Tom Rowden, galactic overlord of Naval Surface Forces, ordained a “standdown” to review standards, procedures, and training in all LCS engineering departments. As the term implies, that means standing down from daily chores, dropping everything to search out the failings that prompted such an operational pause.

A rash of incidents suggests there may be a chronic problem in the material or human dimensions within a community. Chronic troubles warrant introspection and corrective action.

Nor does the hunt for systemic failings stop with LCS crews. This is a surface-navy-wide endeavor. Admiral Rowden directed my old department, the Engineering Training Directorate at the Surface Warfare Officers School in Newport, to execute a thirty-day review of “the wholeness of our LCS engineering education and training to include the testing and retraining of all LCS engineers.” Navy leaders, moreover, are restructuring the LCS program, for instance by modifying crewing and deployment patterns and designating four hulls as full-time training platforms.

Officialdom oftentimes retorts to criticism of new ship types by claiming that “first-in-class” vessels always suffer through growing pains. And there’s no gainsaying that. Ships are intricate mechanisms. Seldom does an intricate mechanism work perfectly from day one. But the latest bad news is of a different order altogether. The first LCS joined the fleet in 2008, fully eight years ago. All ship types have quirks, but few ship types are still encountering mission-threatening hull, mechanical, and engineering troubles eight years after their inception. Most are working warships that give their operators a few headaches.

In 1989, for instance, I deployed to the Baltic Sea aboard the first Aegis guided-missile cruiser, USS Ticonderoga. That was six years after the first-in-class cruiser entered service, yet our excellent Baltic adventure was far from her first overseas cruise. Indeed, Ticonderoga ventured to the Mediterranean Sea by late 1983, the same year she joined the fleet. Yes, the Ticonderogas had their idiosyncrasies—in large measure because, as a cost-saving measure, shipwrights mounted bulky cruiser deckhouses on destroyer hulls barely big enough to accommodate them. But the Franken-design worked. Crews and shipyards fashioned workarounds and got on with things.

Same goes for the Arleigh Burke–class Aegis destroyers. The first-in-class USS Arleigh Burke was commissioned in 1991. The man-of-war deployed to the Adriatic Sea and Persian Gulf in 1993, departing less than two years after joining the fleet. Did she and her sisters encounter troubles? Doubtless—but no showstoppers of LCS-like proportions.

The U.S. Navy’s image problem goes beyond the littoral combat ship, important though that program is. Questions have also engulfed the navy’s new nuclear-powered aircraft carrier and capital ship, USS Gerald Ford. For example, shipbuilders have installed a new type of arresting gear aboard the flattop. Arresting gear is the machinery that brings tactical aircraft to a stop on the tiny parcel of real estate that is a carrier flight deck.

The advanced arresting gear is a promising piece of kit yet remains unproven. So uncertain are its prospects that navy spokesmen have taken to musing, Hamlet-like, about reverting to older yet time-tested hydraulic technology for future Ford-class carriers.

This is a serious defect. A nuclear-powered aircraft carrier without working catapults or recovery gear amounts to a supersized LHA or LHD, a ship that operates a modest complement of helicopters or jump jets like the U.S. Marines’ F-35B joint strike fighter. That’s a paltry substitute for a carrier air wing. Until and unless such maladies are resolved, Ford will not qualify as a one-for-one replacement for the venerable Nimitz-class carriers.

The nightmare outcome for U.S. Navy branding and messaging? A shrug. Foreign audiences—the determinants of U.S. efficacy in peacetime strategic competition—could shrug when navy leaders announce plans to, say, stage a four-ship LCS squadron in Singapore. In the public mind, that would mean Washington intends to forward-deploy a detachment of those ships that are always incapacitated. Big deal.

It’s hard to shake off such perceptions. Doubt about the U.S. Navy’s capacity to take to the high seas and defeat enemy fleets could seep into lay audiences’ perceptions. Skepticism could embolden prospective opponents. It could leave allies and friends wobbly, ill at ease, and resigned to making their peace with domineering powers rather than trusting to the U.S. military to defend them.

Few, in other words, will believe America can keep its promises to allies and friends—or make good on threats aimed at foes—if its warships break down during peacetime steaming. If routine operations are too hard for the surface navy, observers could reasonably ask, how would it fare in combat when missiles and torpedoes are flying about?

In short, the political repercussions of equipment failures could prove dire in tense times. It matters not whether perceptions of American engineering or weaponeering are fair or accurate. It only matters whether onlookers consider the U.S. Navy the likely victor should peacetime competition give way to armed strife. Repeated bad news out of the LCS, Ford or Zumwalt programs dulls the U.S. Navy’s political edge.

Martial sage Carl von Clausewitz depicts peacetime strategic competition as a “war by algebra,” which in effect means war through comparing the antagonists’ force structures and projecting who would triumph in wartime. Naval war by algebra is war by relative numbers of ships, planes, munitions, and mariners, as well as the perceived warfighting capacity of crews and thingamajigs.

Here’s the thing: military implements are black boxes to outsiders until used in action against foes. It’s hard for nonspecialists to gauge how these black boxes would perform in combat. With no fleet engagement to furnish proof of a navy’s effectiveness, people judge by whatever data are available—including disheartening news from the fleet.

So fixing engineering shortcomings is more than an everyday material challenge. It’s about competing in the war of perceptions. Constant bad news could prompt key audiences to deprecate littoral combat ships, Ford­-class flattops, or Zumwalt-class destroyers—and thus to deprecate the U.S. Navy’s combat power as a whole when measured against Russia’s or China’s navy.

Following Multiple Naval Collisions, The U.S. Navy Is Changing How It Operates