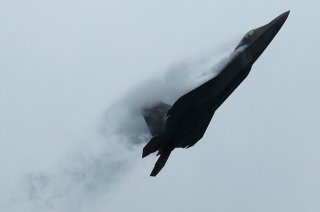 Here’s What You Need to Remember: State-run Chinese media is claiming (back in 2016) that the People’s Liberation Army has been able to track the U.S. Air Force’s Lockheed Martin F-22 Raptor stealth fighters over the East China Sea. While the Chinese report might be easily dismissed as propaganda—it is not beyond the realm of possibility. In fact—it’s very possible that China can track the Raptor. Stealth is not a cloak of invisibility, after all. Stealth technology simply delays detection and tracking.

First off, if a Raptor is carrying external fuel tanks—as it often does during “ferry missions”—it is not in a stealth configuration. Moreover, the aircraft is often fitted with a Luneburg lens device on its ventral side during peacetime operations that enhances its cross-section on radar.

Traditionally, guiding weapons with low-frequency radars has been limited by two factors. One factor is the width of the radar beam, while the second is the width of the radar pulse—but both limitations can be overcome with signal processing. Phased array radars—particularly active electronically scanned arrays (AESA)—solve the problem of directional or azimuth resolution because they can steer their radar beams electronically. Moreover, AESA radars can generate multiple beams and can shape those beams for width, sweep rate and other characteristics. Indeed, some industry experts suggested that a combination of high-speed data-links and low-frequency phased-array radars could generate a weapons quality track.

This article was first published in 2016.