IT-1 Dragon: The Crazy Soviet Tank You've Never Heard Of 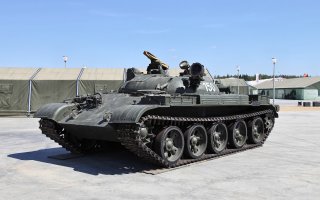 Here's What You Need to Know: Only 220 IT-1s were manufactured during its serial production run, and the vehicles were withdrawn from service between 1972 and 1973.

The IT-1 Dragon is an interesting dead end in the history of Soviet tank development. Developed at a time where the capabilities and limitations of anti-tank Guided Missiles (ATGMs) had not yet fully been fleshed out, the IT-1 was a tank designed to use ATGMs as its primary weapon. While relatively unsuccessful in service, the development of the IT-1 is interesting and provides a critical stepping stone into understanding why the Soviets adopted gun-launched ATGMs (GLATGMs) in number in following tanks.

The story begins in the 1950s, when Vyacheslav Malyshev, the People’s Commissar for Heavy Machine Building (de facto the director of the Soviet tank industry), held a meeting with Soviet tank designers in January 1956. Malyshev asked whether they were working on incorporating ATGMs onto their current designs. While some designers discussed it, no concrete steps were taken. This changed after the meeting, and developers began planning and grouping up to develop an ATGM-armed tank.

Through the 1950s, multiple ATGM systems were developed—notably, the 3M6 Shmel and 3M11 Fleyta. However, these were mounted on dedicated light platforms such as GAZ jeeps, and were not well suited for tank usage. In early 1957 it was clarified to designers that an ATGM-armed tank should be effective in offensive as well as defensive combat, since light platforms were already effective on the defense.

This meant that the tank would need to have a stabilized sight to guide the missile. Fully manual guidance—such as the Malyutka, or automatic radar, or infrared guidance—were considered, but the first was deemed to be too difficult and the second was not technically mature enough at the time. Development of a stabilized sight took some time, but as the first true two-axis gun and sight stabilizers were in development at the same time for gun tanks the challenge was not insurmountable.

By late 1957 the design for the first missile tank was finalized, and given the designation Object 150. It was based on a T-55 chassis, but the turret was made significantly more squat and a launcher was installed that could be extended or retracted through hatches in the turret. A single machine gun was retained for anti-infantry defense at close range. Twelve ATGMs were able to be held inside the turret. Protection was analogous to the T-55, but it was anticipated that the vehicle would be harder to hit due to its reduced profile.

However, tests of the Object 150 on the T-55 chassis did not go well, and the project was returned to development. In 1962 the design was migrated onto the T-62 chassis. Testing continued through the 1960s. Interestingly, the Object 150 was compared to the Object 432, the predecessor of the T-64 in firing trials. It was calculated that the Object 150 could hit targets at longer ranges and destroy more tanks with its stored ammunition, due to the higher hit probability of its guided ammunition.

Trials of the Object 150 finished in 1968 and the vehicle was accepted into service as the IT-1 tank destroyer. It could fire ATGMs out to 3.3km, but it had a rather large minimum range of 300m. However, the ATGMs it fired were rather weak, only able to penetrate 260mm of RHA. However the lack of a gun combined with the large minimum range meant that the Object 150 could not be used in conjunction with other tanks as it would have to lag behind when tanks closed to make a final assault. Only 220 IT-1s were manufactured during its serial production run, and the vehicles were withdrawn from service between 1972 and 1973.

However, there was a brief consideration of mounting the 73mm Grom from the BMP-1 on the IT-1s turret to provide it with close combat capability. The 73mm Object 150 was planned to be put on the T-64 chassis, but by that point, development of gun-launched anti-tank guided missiles was already underway, rendering the T-64 Object 150 obsolete.