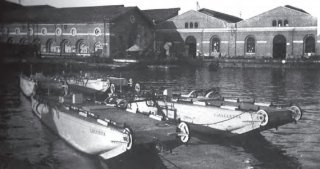 Here's What You Need to Remember: Though the boats were not successful, the Grillo was raised and copied by the Austro-Hungarian Navy, but the end of the war prevented them from being used again, ending the short lifetime of the Grillo-class.

In the early days of World War One, Italy had a tough choice to make.

Rome then made a tough choice: it declared neutrality at the beginning of hostilities in 1915, believing that support for the Central Powers would not result in Italian acquisition of coveted territories in the north and across the Adriatic Sea in what is now modern-day Croatia.

Rome had become convinced that the Allies would prevail over the Central Powers. After months of indecision, Italy signed the London Pact with France and Britain, casting their lot with the Allies.

Though fierce fighting swept across the mountainous Italian Front, fighting in the Mediterranean was less intense, despite the presence of Austro-Hungarian naval elements in the Austrian Littoral, a collection of territories just across the Adriatic Sea to Italy’s east. The Littoral formed part of the territory Italy coveted from the Central Powers — including Austria-Hungary’s primary seaport, Pula.

Ports were a ripe target for the Regia Marina, the Royal Italian Navy. Using high-speed torpedo boats, the Marina entered the Trieste harbor defenses in a 1917 nighttime raid. They scored an easy victory, sinking the SMS Wein, a large Austro-Hungarian coastal defense ship, and left without taking any casualties.

Partly in response to the successful Italian raid, the harbor at nearby Pula was fortified. In addition to coastal artillery, the Balkan port was equipped with anti-submarine nets, mines, anti-torpedo nets, and other obstacles.

The netting, in particular, was a difficult obstacle for the Regia Marina. The engines on their fast-attack boats would get fouled on the netting, stranding the boats. They needed something different, a boat that could tackle the netting and get over it without getting stuck, something that could go up and over harbor obstacles.

The Grillo-class was just such a boat — a rectangular, flat-bottomed motorboat with tracks on both sides, superficially resembling the British heavy tanks used on the Western Front. The Grillo-class tracks had outward-facing spikes installed and each track was driven by a five horsepower electric motor.

When approaching harbor netting, the outboard engine would be turned off, at which point the electric motors would be turned on, moving the tracks. The tracks would grip obstacles like netting, pulling the flat-bottomed boat up and over, back into the water.

They were only used twice, both unsuccessfully. The first attempted raid ended in two of the class being scuttled. Crews had overestimated how fast their boats would be using just the electric motors and were not in position before daybreak. They scuttled their boats to prevent them from being captured.

Around a month later, the Grillo fared somewhat better and traversed nearly all the harbor obstacles. While the electric motor ran quietly, the Regia Marina had not counted on the loud noise clattering noise the metal tracks made, which alerted harbor defenders. Before torpedos could be fired at enemy ships, the Grillo was either scuttled or sank by enemy fire, and the Grillo’s crew were captured.

Though the boats were not successful, the Grillo was raised and copied by the Austro-Hungarian Navy, but the end of the war prevented them from being used again, ending the short lifetime of the Grillo-class.