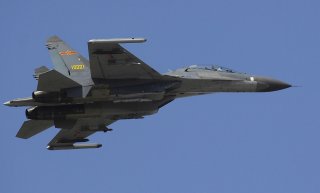 Here's What You Need to Remember: It is obvious why China would want to domestically produce the Su-27 Flanker—it’s agile, has a high top speed, and good range. In fact, the Su-27 is supermaneuverable. For a time, it was the airframe of choice for the Russian Knights, an aerobatic demonstration team similar to the U.S. Navy’s Blue Angels.

Even though the J-11 designs are capable, their capabilities are also somewhat limited. The designs that they were based on are from the late 1970s—making them nearly forty years old. They are also not stealthy—and crucially do not support aerial refueling which is a severe hindrance.