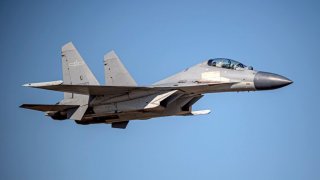 Here's What You Need to Remember: Where might China actually confront enemy air defenses? Of course SEAD aircraft would have application in a conflict with Taiwan or, more unlikely, Japan. However, the electronic-warfare aircraft may be most oriented at countering U.S. Navy surface warships, which bristle with SM-2, SM-6 and Sea Sparrow surface-to-air missiles for shooting down both hostile aircraft and antiship missiles.

Even with a maximum load of electronic-warfare gear, the J-16 would have six of its twelve hardpoints free to carry weapons. China has three different types of anti-radiation missiles (ARM), which are designed to home in on enemy radars from afar. The CM-103 missile has a range of sixty-two miles and is probably accurate enough to hit naval and ground targets with its 176-pound warhead. China also has an indigenously developed copy of the Russian Kh-31P missile, known as the YJ-91, which has a slightly longer range and also has antiship applications. Finally, there is an LD-10 ARM missile derived from the PL-12 antiaircraft missile. Of course, the J-16D could carry most of the other armaments that the basic Red Eagle fighter can carry on its underwing hardpoints.

After all, China is more famous for how its own missile systems serve in its anti-access/area-denial strategy. Where might China actually confront enemy air defenses? Of course SEAD aircraft would have application in a conflict with Taiwan or, more unlikely, Japan. However, the electronic-warfare aircraft may be most oriented at countering U.S. Navy surface warships, which bristle with SM-2, SM-6 and Sea Sparrow surface-to-air missiles for shooting down both hostile aircraft and antiship missiles. These are especially potent when their firepower and sensors are coordinated by the Aegis combat system, which include vessels in the American, Japanese, South Korean and (soon) Australian navies.

Sébastien Roblin holds a master’s degree in conflict resolution from Georgetown University and served as a university instructor for the Peace Corps in China. He has also worked in education, editing and refugee resettlement in France and the United States. He currently writes on security and military history for War Is Boring. This first appeared last 2017.