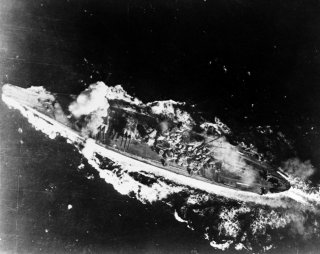 Here's What You Need To Remember: The stage was set. The most powerful naval task force ever assembled would meet one of the world’s largest remaining fleet of ships and aircraft. At stake would be the survival of the Japanese Empire, the independence of the Philippines, and the lives of nearly 200,000 sailors. By the end, the Imperial Japanese Navy would be broken as a fighting force, and the liberation of the Philippines would have begun.

In late October 1944, the United States and Japan fought what was, by the most useful metrics, the largest naval battle in history. An American armada of more than 300 ships intended to begin the liberation of the Philippines at the island of Leyte. Nearly seventy Japanese warships sought to stop that invasion. The fleets collided in dramatic fashion, with moments of terror and heroism on both sides. By the end, the United States had established a foothold in the Philippines, and the Imperial Japanese Navy was finished as a major fighting force.

Japan’s military situation had become dire in the wake of the Battle of Philippine Sea. In that battle Japan had lost three fleet carriers (including its newest, Taiho, and one of the survivors of Pearl Harbor, Shokaku), and a tremendous number of pilots and aircraft. U.S. advantages after Philippine Sea only grew, as more American ships and planes came into service. Japan’s outer ring of island defenses had been pierced, and its central supply lines to the resources (particularly oil) of Southeast Asia were now vulnerable. The United States Navy, for its part, had flexed its muscles at Philippine Sea and in other raids along the Japanese periphery, and was now confident of its advantages. Moreover, despite the setback at Arnhem it had become clear that the victory over Germany was only a matter of time.

The United States had the luxury of determining where the next battle would be fought. After debating whether to invade Formosa or the Philippines, the United States decided to concentrate its attention on the latter. Considerations included the promise that General Douglas MacArthur had made when he left U.S. forces in 1942, the continuing pro-American resistance on the islands, and the belief that they would provide a base for straddling Japan’s remaining supply lines to Southeast Asia. Decisionmakers also worried that the Formosa operation would take up too much manpower, and that it had the potential to draw the United States too deeply into China.

Once the decision to invade the Philippines was made, the American settled on Leyte as the primary invasion target. The island of 900,000 was thought to have a particularly sympathetic population, good invasion beaches and terrain well-suited to U.S. military strengths. The Americans began by launching raids against Formosa and the Ryukus in mid-October, designed to degrade Japan’s land-based air. These raids succeeded not only in destroying a large portion of Japan’s air forces, but also in temporarily leaving the Japanese in the dark about U.S. plans.

U.S. intentions became clear on October 17, when American troops began landings on outlying islands off Leyte. The main landings commenced on October 20. Admiral Thomas Kincaid, commander of the 7th Fleet, was tasked with softening up the beaches on Leyte, as well as protecting them from Japanese attack. His battle squadron, under the command of Jesse Oldendorf, consisted of six older battleships (several of which were attacked at Pearl Harbor), eight cruisers and twenty-eight destroyers. Twelve small escort carriers, screened by destroyers and destroyer escorts, would protect the actual landing sites.

The cream of American naval power lay in the 3rd Fleet. At his disposal Admiral William “Bull” Halsey had the most powerful naval formation in the world. It included eight fleet carriers, eight light carriers, six fast battleships, and a multitude of cruisers and destroyers. Halsey wanted to ensure the security of the landings, but also hoped to destroy what was left of the Imperial Japanese Navy.

Japan’s ability to resist was waning rapidly, leading Imperial Japanese Navy commanders to believe that they had to take high risks to have any chance of prevailing. The Japanese prepared a variety of contingency plans for defeating invasions of probable U.S. targets, including Formosa and the Philippines. When the raids began on October 12, the Japanese initially thought the blow would fall on Formosa. Once it became clear that the Philippines would be the target, the Imperial Japanese Navy put its Victory plan into effect.

The massive loss of carrier and pilots at Philippine Sea meant that the Imperial Japanese Navy could no longer rely on its carrier force as a useful strike arm. Instead, to distract American carriers away from the battleships and cruisers of the Combined Fleet, the Japanese decided to create a sacrificial force of four aircraft carriers (along with attendant escorts) in order to lure American forces away from the main effort.

Three other Japanese task forces would approach Leyte on different headings. Admiral Shoji Nishimura would command a force of two battleships, one cruiser and four destroyers headed for the Surigao Strait, the eastern gateway to the landings at Leyte. Admiral Kiyohide Shima would support Nishimura with three cruisers and four destroyers. The cream of the Imperial Japanese Navy would approach Leyte from the west. A massive battlefleet under Admiral Takeo Kurita included five battleships, twelve cruisers and fifteen destroyers. HIJMS Yamato and HIJMS Musashi, the world’s largest battleships, formed the core of Kurita’s force.

The Japanese plan required careful timing and an enormous amount of luck. If it worked, it would bring the soft underbelly of the 7th Fleet under the guns of the most powerful battleships in the world. If that happened, the invasion of Leyte could be delayed, or even defeated, setting back U.S. war aims by months at least.

The stage was set. The most powerful naval task force ever assembled would meet one of the world’s largest remaining fleet of ships and aircraft. At stake would be the survival of the Japanese Empire, the independence of the Philippines, and the lives of nearly 200,000 sailors. By the end, the Imperial Japanese Navy would be broken as a fighting force, and the liberation of the Philippines would have begun.

Robert Farley, a frequent contributor to the National Interest, is the author of The Battleship Book. He serves as a senior lecturer at the Patterson School of Diplomacy and International Commerce at the University of Kentucky. His work includes military doctrine, national security and maritime affairs. He blogs at Lawyers, Guns and Money, Information Dissemination and the Diplomat. This first appeared in 2019.