Japan Has Its Eyes On the Growing Threat From China 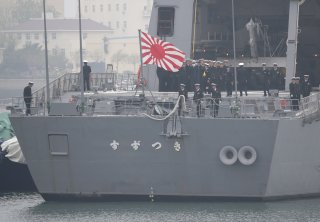 Here's What You Need to Remember: Japan’s military build-up raises a few interesting questions as to whether the country, now facing a growing and fast-changing threat environment, might actually revise its post-World War II 1947 Constitution, which currently denies the country’s right to employ military force, a move followed by the 1954 introduction of the Japanese Self-Defense Forces.

The U.S. military and Japanese Self Defense Forces have mutually committed to strengthening alliances, training opportunities and joint military exercises as part of a decided effort to take a stronger stance against Chinese provocations in the region.

Following a recent meeting in Japan Defense Secretary Lloyd Austin and Japanese Defense Minister Nobuo Kishi identified a handful of concerns specific to China such as its provocative maneuvers in the South China Sea and disputed Senkaku Islands in the East China Sea.

“In order for the U.S. forces and the self-defense force to serve the missions, we agreed on the notion of the necessity to engage in more sophisticated bilateral, as well as many multilateral exercises,” Japanese Defense Minister Nobuo Kishi said, according to a Pentagon report.

The Lloyd-Kishi discussions covered a number of key areas, including focus upon a recent Chinese law which authorizes the Chinese Coast Guard to patrol the Senkaku Islands, a development prompting Japanese concern as the area is claimed by Japan but has been a subject of dispute for many years. As far back as 2012, the Chinese launched a military faceoff with the Japanese when it sent Chinese navy ships to the Senkakus.

In response to the Japanese concern, U.S. officials reiterated that the Senkakus come under Article 5 of the U.S.-Japan treaty mandating America’s defense of Japan, a Pentagon report states. This is quite significant as, in a manner almost analogous to the North Atlantic Treaty Organization’s Article 5 Defense clause which ensures a collective response to any hostile attack.

Given its consistent and growing presence in the Pacific, the U.S. Navy would be very well positioned to respond in defense of Japan with Carrier Strike Groups, air assets from Guam or even amphibious forces dispatched to safeguard the islands from any kind of Chinese incursion.

The Senkakus are positioned in a strategically vital area in the East China Sea north of Taiwan, yet south of Japan.

The U.S.-Japan alliance is already quite strong, yet Austin envisions more possibilities for military-to-military cooperation.

“We’ve got a very strong alliance with Japan, and we’re going to be looking at ways where we can make it stronger,” Austin said.

Japan’s now underway multi-billion dollar acquisition of U.S.-built F-35 stealth fighters, for example, offers a more recent example of what continues to be a longstanding, multi-year developmental partnership between the two countries. Other partnerships includes a number of high-impact weapons systems such as the SM-3 interceptor missile, Global Hawk drone and Aegis radar systems. As part of this clear military buildup, Japanese leaders also continue to debate the possibility of rewording the Japanese constitution to expand possibilities for military operations and maneuvers in support of defensive aims.

Japan’s military build-up raises a few interesting questions as to whether the country, now facing a growing and fast-changing threat environment, might actually revise its post-World War II 1947 Constitution, which currently denies the country’s right to employ military force, a move followed by the 1954 introduction of the Japanese Self-Defense Forces.

Interestingly, an essay in The Baines Report from last year says the Japanese Liberal Democratic Party may be planning to add language to the constitution “specifying Japan’s right to defend itself.”

Could this lead to the ultimate authorization of some kind of offensive force? For purely deterrence reasons? After all, is that not the premise of the U.S. military force: to prevent war by maintaining a superior force which potential aggressors simply do not wish to confront? Such a prospect might indeed make sense for U.S. policy makers to support, given the strength of the U.S.-Japanese alliance and the growing extent of technological collaboration between the two countries. Perhaps of greatest significance, a stronger Japanese Defense Force can play a critical role with regional U.S. allied efforts to contain and counter China.