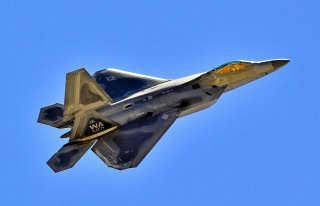 Back in 2018, Japan declared that it would develop a new jet fighter instead of buying it from other nations, according to Japanese media.

The Ministry of Defense rejected the proposals for the American F-22, F-15 and Eurofighter Typhoon because they failed to meet cost and capability requirements for the F-3, which would replace Japan's aging F-2 fighters, officials told the newspaper Mainichi Shimbun.

"The ministry plans to incorporate the project into the next five-year mid-term defense program to be drawn up at the end of the year, with an eye on a joint development program with foreign companies to lower the overall financial burden, which could reach trillions of yen," the newspaper said. "The ministry also hopes to pursue introducing main components such as the engine that incorporate Japan's own technology."

Japan's F-2, a variant of the U.S. F-16, was introduced around 2000 and will reach the end of its service life in the 2030s. The Japanese Air Self-Defense Force has around 92 F-2s, plus more than 200 F-15Js, the Japanese version of the U.S. F-15. These are considered fourth-generation aircraft dating back to the Cold War: the F-3, like F-22 and F-35, would be a fifth-generation aircraft, which tends to be stealthier and more sophisticated than its predecessors.

For the F-22, the aircraft was deemed expensive, and Japanese officials worried that the U.S. might not lift its ban on exporting the stealth fighter. "The remaining option is domestic development, which has the backing of defense industry groups and some ruling Liberal Democratic Party lawmakers seeking to preserve the production and maintenance platforms for Japan's fighter jets," Mainichi Shimbun said. "However, a number of challenges including extremely high costs and a lack of sufficient development experience on the part of Japanese companies are still obstacles for the project."

The Defense Ministry has already spent 190 billion yen ($1.69 billion) to develop the engine and electronics for the F-3. "The government is therefore seeking to share the financial burden with British or German-French partners as they are also looking into developing next-generation jets," said Mainichi Shimbun. "But an international program could lead to difficulties in coordinating differing requirements for the deadline, capabilities and distribution of tasks."

Asia security expert Benjamin Rimland called the idea of Japan building its own fifth-generation aircraft "pie in the sky nonsense."

"Japan is in a tough spot because it is trying to replace the F-2 while the rest of the Western world is between jet generations," Rimland, a researcher at the German Marshall Fund of the United States, told the National Interest. "Fifth-generation jets are being introduced in Western militaries but sixth-generation jets are still years down the pipeline."

Japan will also face pressure as U.S. companies lobby the U.S. government to persuade Japan to buy American fighters. "I find it hard to believe that Japanese industry can sell the Ministry of Defense and Ministry of Finance on a tender for the development and production of more than 100 airframes—not to mention avionics and engines—of a wholly new design," Rimland said. In addition, Japan has not had much success in exporting its military equipment, so subsidizing the F-3 through foreign sales is unlikely.

Rimland does see two likely options for Japan: building on existing agreements with Britain to co-develop a new fighter, or waiting until sixth-generation aircraft begin to take shape, and then trying to partner with another nation for co-development.