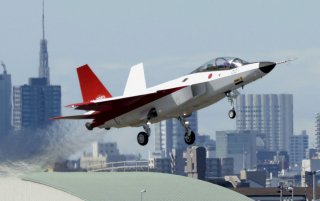 Here’s What You Need to Remember: New technologies check off many characteristics of conceptual sixth-generation fighter jets—(though optional-manning and drone-control have yet to be mentioned), and are individually pretty impressive. However, integrating them into a capable flying platform poses a much greater challenge, as does mass-producing them in a cost-efficient manner.

Japan’s 2019 Mid-Term Defense review quietly revealed that after years of hesitation, Tokyo has decided to press ahead with development of its own domestically designed sixth-generation Mitsubishi F-3 air-superiority stealth fighter, rather than purchasing an additional foreign stealth design to supplement its growing fleet of F-35s.

In February 2019, the Japanese Ministry of Defense explicitly confirmed these intentions to Jane’s. Reportedly, F-3 performance requirements are set to be released in the 2020 budget, with development officially beginning in 2021 and a first flight targeted for 2030.

The new F-3 jets would then begin replacing Japan’s over one hundred home-built Mitsubishi F-2 single-engine fighters—heavily upgraded (and over-priced) F-16s—starting in the mid to late 2030s.

In 2016, Japan achieved a technological milestone when it flew its Advanced Technology Demonstrator, the X-2 Shinshin. In development since 2007, the ATD cost $350 million and featured innovative composite ceramic/silicon carbide skin and powerful vector-thrust turbofans for extreme maneuverability and super-cruising flight speeds. The Shinshin, described in greater detail in this article, supposedly had a radar cross-section the size of a ‘giant beetle.’

But the ATD was a tech-demonstrator, not a prototype for an actual fully-equipped fighter plane. When Tokyo initially balked at the estimated $40 billion, it froze further development and issued Requests For Information to foreign aviation firms.

The concept of a hybrid of the F-22 airframe with the F-35’s more advanced avionics seemed particularly attractive; but the bill for such a plane remained extremely high at an estimated $215 million per aircraft. Japan also courted Grumman, which decades earlier developed an XF-23 ‘Black Widow’ stealth fighter, and British BAe, which is currently developing the Tempest stealth fighter.

Either option would have meant committing to build more fifth-generation fighters instead of looking ahead to sixth-generation designs such as the Tempest and European FCAS.

Furthermore, advanced military aviation industries are very difficult to start up again after lengthy interruption as experienced engineers retire, factories close and technologies become outdated. If Japan didn’t start developing a stealth fighter now, it might become impossible to do so in the future, sinking Tokyo’s hopes of breaking its long-standing dependence on U.S.-based defense companies.

Many analysts predicted the F-3’s demise after Tokyo announced its intention to purchase 105 more F-35As and F-35B Lightning stealth jets in addition to the 42 already ordered. Tokyo may even procure some of the F-35s more quickly and cheaply from U.S. factories instead of producing them in Japan.

However, the F-35 is designed foremost as an air-to-air capable strike plane rather than air superiority fighter in the vein of the F-22 Raptor, which is no longer in production.

While the JASDF is building up its surface strike capability, defensive air patrols are by far its primary mission. In 2018, the JASDF dispatched fighters to intercept approaching Russian and Chinese military aircraft on average nearly three times per day. The PLA Air Force outnumbers Japan’s six-to-one, and its latest fighters like the J-11D and J-20 come close to matching Japan’s historical qualitative advantage.

Characteristics desirable in air defense fighter are long range/endurance for lengthy patrols; high speed to swiftly engage incoming aircraft before they release their weapons; and maneuverability to defeat opposing fighters in within-visual-range dogfights. In all of these old-school characteristics, Japan’s forty-year-old F-15J Eagle fighters out-perform the F-35.

Nonetheless, the F-35’s stealthy radar-cross section and powerful networked sensors make it more survivable and dangerous than an F-15 that can be detected from dozens of miles away. But Japan would still prefer a fighter that was both stealthy and a dedicated air-to-air combat machine.

When Jane’s asked a Japanese official what the top five priorities were for the F-3, he listed “capability for future air superiority” first.

The other qualities included capacity for upgrades, domestic technological ownership, and affordability. Japan may hope it could lower costs by exporting abroad, as Japan’s parliament legalized arms sales in 2014. However, Japan’s military hardware tends to be quite pricey and it has yet to have much export success. Stealth fighters, though, remain high in demand and difficult to acquire, with only the F-35 having been exported so far.

All that’s certain is that the F-3 will be a twin-engine fighter capable of mounting six internal weapons. Beyond that, highly divergent concept sketches released by Japanese engineers indicate a final design is far from being selected.

However, there is more information available of various technologies Japanese engineers are eager to incorporate in the F-3.

In 2019, Japan began testing XF-9-1 low-bypass turbofans developed by Ishikawa Heavy Industries. These can reportedly generate 11-12 tons dry thrust, or 15-16.5 tons ‘wet’ (dumping fuel into the afterburners) and tolerate 1,800 degrees Celsius of heat. While the F-22’s two F119 turbofans generate 13 tons dry and 17.5 wet thrust, the XF-9 is a half-meter shorter and 30 centimeters slimmer than the F-119, leaving more room for internal weapons.

Separately, Japan’s defense ministry has been researching three-dimensional thrust-vectoring nozzles which redirect the engine’s thrust up to twenty degrees in any direction. If these can be implemented without compromising radar-cross section (difficult), this suggests Japan wants the F-3 to rank amongst the world’s most maneuverable modern jet fighters alongside the F-22 and Su-35, enhancing its ability to evade missiles and out maneuvers adversaries in within-visual range combat.

Each XF-9 can generate an extraordinary 180 kilowatts of electricity, which could be potentially be used to power directed-energy weapons such as lasers or especially radar-based microwave weapons that could fry circuitry in ballistic missiles streaking towards Japanese islands.

Japan has also studied turning the F-3’s airframe skin into a huge ‘conformal’ radar antenna using composite smart-skin sensors, and tested an electromagnetic ESM sensor that not only helps detect adversaries, but which can minimize or distort a stealth fighter’s own radio-frequency emissions for self-defense.

For cockpit instrumentation, Japanese scientists are considering ditching the traditional ‘Head’s Up Display in favor of an F-35 style Helmet Mounted Display system combined with a single large liquid-crystal display. An artificial-intelligence using man-machine interface is also being developed to optimize data flow to the situation and lighten pilot taskloads.

Japan has also been researching high-speed datalinks that could network sensors and exchange targeting data with friendly forces. These are specifically intended to counter numerically superior enemy adversaries as well as stealth aircraft like China’s J-20 stealth fighter or forthcoming H-20 stealth bomber.

Technologies tested in the X-2 that could reappear in the F-3 include EMP-resistant fiber-optic fly-by-wire avionics, and ‘self-repairing’ flight systems that detect and automatically compensate for damage to an aircraft’s control-surfaces.

Japanese defense ministry also clearly is inviting technology transfers and assistance from firms like Lockheed, Boeing or BAE to ease the project’s completion, despite the lead taken by domestic firms.

The above technologies check off many characteristics of conceptual sixth-generation fighter jets—(though optional-manning and drone-control have yet to be mentioned), and are individually pretty impressive. However, integrating them into a capable flying platform poses a much greater challenge, as does mass-producing them in a cost-efficient manner. The U.S. F-35, for example, suffered many delays and cost overruns due to difficulties integrating its many new technologies under concurrent development. Thus Japanese engineers have their work cut out for them as they seek to realize the fifteen-year development goal.