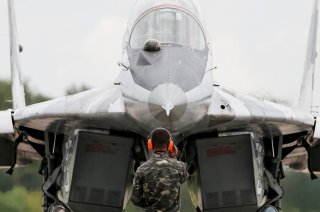 Key Point: This fighter was mass-produced and is used by many nations. But it suffered from several key problems.

The MiG-29 is one of the world’s most prolific fighter jets. It currently serves in both NATO and CIS air forces. It’s the fifth most common combat aircraft in the world, even the current president of Bulgarian used to fly them.

While the Su-27 featured an advanced computerized fly-by-wire system that allowed for an aerodynamically unstable airframe, the MiG-29 despite a similar layout of engine and wings did not have this, instead relying on a traditional system of hydraulically controlled control surfaces. The MiG-29 also packed a less powerful radar and had much less internal fuel relative to the Sukhoi.

However, the two aircraft were similar in many aspects. Both had a focus on heat-seeking weaponry, with bulbous InfraRed Search and Track (IRST) sensors on the nose of both aircraft. These were integrated with the advanced thrust vectoring R-73 missile, which could be slaved to a helmet mounted sight which allowed a pilot to lock onto a target just by looking at it. This could make the MiG-29 very hard to beat in a close-in dogfight.

Around the same time that these updates were being completed, the MiG-29s reputation was about to take a beating. While exact numbers are uncertain, the Iraqi MiG-29s (9.12s) didn’t fare well against coalition air power during Operation Desert Storm. Eight years later, Yugoslavian MiG-29s (also 9.12s) also suffered significant losses when facing down NATO air power over the Balkans.

For other export customers, the MiG’s biggest rivals are variants of the Su-27. While so called “second-generation” MiG-29s such as the MiG-29M and MiG-29SMT (MiG-29M technology applied to 9.13 airframes) brought the level of avionics up to that of contemporary Su-27 variants, these updates have not come cheap. In addition, the SMT upgrades have mixed reviews of quality. Notably, the Algerian Air Force canceled its order of MiG-29SMTs in favor of more Su-30MKAs.