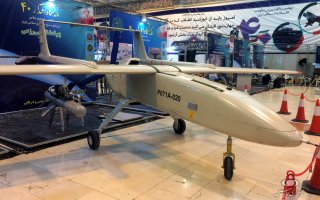 Here's What You Need to Know: The Mohajer-6 can carry guided munitions, state media claims.

Iran has revealed a new attack drone. The Kian jet-powered unmanned aerial vehicle appears to be around 10 feet in length.

With its simple shape and apparent fiberglass fuselage, the new UAV probably is unsophisticated. But even an unsophisticated drone can pose a danger to enemy forces if its user employs it the right way and in sufficient numbers.

Brig. Gen. Alireza Sabahifard, the head of Iran’s air-defense force, revealed the Kian at a ceremony in Tehran on Sept. 1, 2019. Sabahifard told state media the UAV can fly more than 600 miles and climb to an altitude of 15,000 feet.

The Kian will carry out precision strikes against “distant targets … far from Iran’s borders,” Sabahifard added.

The Jerusalem Post characterized Sabahifard’s comments as an “apparent threat to Israel or other countries.”

“Oddly, the drone announcement was made in English – but Farsi media downplayed its importance,” The Jerusalem Post pointed out. “This likely means that [state media] ISNA and PressTV were given orders to push this information to make Western audiences aware of it.”

Tehran also showed off new “smart bombs” on Aug. 6, [2019]. According to reports, these were dubbed the Yasin and Balaban and a new series of Qaem “optic bombs.” They can be used on drones and have “advanced, precision-guided” equipment. In January, Iran also showed off another UAV called Saegheh-2, which looks like a medium-range reconnaissance drone modeled on the U.S. RQ-170.

As if that wasn’t enough drones, Iran also showed off another drone, the Mohajer 6, in June [2019]. It is capable of conducting surveillance missions. Tehran seems to have a surfeit of all this new military technology. It also seems to have a huge spectrum of drones, but it isn’t clear if all of them work well.

“The unveiling of the drone comes at a time of mounting tensions with the United States, which have escalated since last year when U.S. president Donald Trump unilaterally withdrew from a 2015 nuclear deal signed between Iran and world powers,” Al Jazeera pointed out.

“Washington has since reimposed sanctions to strangle the Iranian economy as part of a pressure campaign to force Tehran to negotiate a new agreement. Iranian leaders say they are open for dialogue if the sanctions are lifted and the U.S. returns to the nuclear deal.”

On July 18, 2019, U.S. troops aboard an amphibious assault ship forced down an Iranian drone over the Strait of Hormuz.

Pentagon spokesman Jonathan Hoffman told The New York Times that Boxer was in international waters at the time of the incident. The drone “closed within a threatening range” before Boxer took action.

Iran around a decade ago began arming some of its drone types with missiles and bombs. Iran Aviation Industries Organization in 2014 revealed a Mohajer variant that Iranian media claimed could shoot down other aircraft.

Just one day before Boxer downed the drone over the Strait of Hormuz, Iranian officials revealed a new model of the Mohajer. The Mohajer-6 “has the capability to carry out surveillance and reconnaissance missions, and enjoys a wide operational range and wingspan with a high precision,” state media reported.

“With the deployment of these unmanned aerial vehicles, any threat to the Iranian borders and even beyond the borders, will be identified, tracked down and removed before it could even take form,” said Brig. Gen. Hasannejad, commander of Iranian army drones.