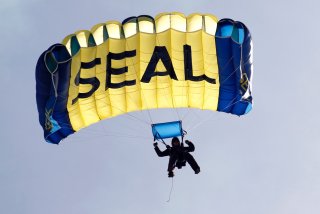 The sand invades every crevice and fold in your skin and clothing like a kind of unfinished cement mixture hellbent on rubbing your exposed patches of water-softened skin until they chafe and bleed. Just when the bright southern California sunshine dries you out, and you feel that blessed warmth that you remember so well from before you started Navy SEAL training, the BUD/S instructors once again order you into the surf zone like maniacal dads gleefully throwing their children into a pool for the first time. Learn to swim, or die.

“This will make you hard, gents,” they growl, tongues firmly in cheeks. They know they are making a bad pun while also telling us that all of this, in effect, is for our own good. We do it grim-faced and resigned to another onslaught of sandy wetness because we want to make it through the training. And the training is designed to figure out which of us will not quit, even when our physical selves want nothing more than warmth, blessed dryness, and physical comfort.

Some will eventually give in to the effect of this relentless physical tribulation. Those that make it  through do so because they find their way to that state of consciousness in which the brain overrides the assault on the body, and that all-powerful and mysterious mass of grey matter residing inside our skulls takes over and drives the machine of blood and bone known as our bodies forward in a state of semi-autonomy. That is the mental state one must achieve to make it through the training; that state in which the primeval mind overcomes the objections and weaknesses of the fragile body.

Three of my blood relatives made it through BUD/S before me. One made it through after me. Five of us in total. Each of us set out not knowing if we had that ability to put mind over body. We hoped we did. We suspected we did, since we had the same genetic make-up as those who had come before us. We each knew that if our father, brother, and cousin could do it, we could do it too. Still, you never really know until you do it. Until you face it.

Sure, you might fail or be ejected from the training for some performance inadequacy. That happens even to the most physically prepared of us. I saw it happen in my own class on multiple occasions. But you have to get to the state of mind in which they will have to kill you or fail you to stop you from making it. Never quit. Never contemplate quitting. Never allow that thought to worm its way into your head. Once it does, all is lost.

That is the one piece of advice I give, and have given, to all those who have asked over the years about making it through BUD/S: just tell yourself you will never quit. Tell yourself that you will prepare the best you can by swimming, running in boots and pants in the sand, doing thousands of push-ups and pull-ups and flutter kicks, and practicing all of the breath holding.

Once you reach that threshold of preparedness, you must then fortify your mind. Obsess over making it. Find your inner demon. Harness it, and hold on tight and ride that supernatural force straight through to the end. The human brain and the power it wields is a force of nature. You have to channel that power — all of it — to propel you forward to the end.

It will end, after all. At some point, you know that about 20 out of 100 of you will be left standing at graduation. They will have thrown everything they have at you to get you to quit. They will make it their mission to break you. It is up to you to stand fast and repel that assault. If I can do it, then you can do it too.