The K-3 Leninsky Komsomol Wasn't the First Nuclear Sub, But She Was a Powerhouse 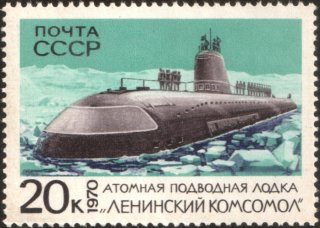 Here's What You Need to Remember: Today, it rests on the banks of the Neva River in St. Petersburg, where it is a museum, a floating testament to the achievements, and accidents, of the Soviet Union.

The November-class (November is a NATO reporting name, native Russian designation is “Keet” or “whale”) was the Soviet Union’s first nuclear-powered class of submarine, and the K-3 was the first of its class.

In 1962, the K-3 shot up through ice in the arctic. It was June, but well below freezing. The floating nuclear reactor had surfaced at the North Pole, a first for the Soviet Union.

Still, better late than never. For her North Pole exploit, K-3 was given the honorific “Leninsky Komsomol,” retained throughout her service.

1967 was a bad year for Leninsky Komsomol. While on routine patrol through the Norwegian Sea, a fire erupted in compartments one and two.

The November-class was equipped with an automatic fire-extinguishing system that, rather than spraying water, which could short-circuit electronics, or flame-retardant, instead filled chambers where fire had been detected with a carbon dioxide-type gas. This would retard the flame’s progress, as a lack of oxygen would rapidly extinguish the flames.

Unfortunately for those unfortunate sailors in compartments one and two, it also extinguished their lives. They died of asphyxiation.

An official Soviet Naval investigation would reveal that the fire was caused by an explosion, likely of pressurized hydraulic fluid catching fire. Subsequent research has questioned if mechanical or human error were to blame, as it was rumored a lighter was found in the compartment where the flames originated, a possible indication of smoking onboard the submarine.

Despite K-3’s less-than-stellar track record, it served mostly event-free for nearly a third of a century. Today, it rests on the banks of the Neva River in St. Petersburg, where it is a museum, a floating testament to the achievements, and accidents, of the Soviet Union.