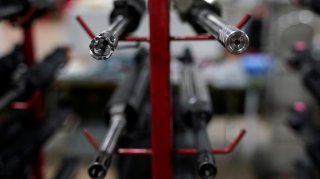 Here's What You Need To Know: The most interesting change on the SR-15 is a bolt that increases reliablility.

As the last place where Eugene Stoner worked before he passed away in 1997, Knight’s Armament Company (KAC) has a unique perspective on how to modernize the AR-15. Before he died, Stoner worked on a modernization of the AR-10 that also incorporated elements of the AR-15. The resulting rifle was called the Stoner Rifle 25, or SR-25, as Stoner no longer worked for Armalite.

While the SR-25 was a very successful rifle in its own right, seeing extensive use in various Special Operations Forces units and general adoption as the M110, KAC was eager to capitalize on its success by scaling it back down to the 5.56 caliber. The result is the SR-15, KAC’s take on a modern AR-15. But unlike many rifles that simply swap the furniture of the AR-15, the SR-15 features a myriad of internal changes.

The most interesting changes on the SR-15 are found in it’s “E3 Enhanced Bolt.” The new bolt changes the geometry of the locking lugs and extractor for increased reliability. While it rarely happens on bolts with good metallurgy, locking lugs on AR bolts have been known to crack and shear under stress, especially with high pressure rounds. The E3 bolt face is enlarged, and the locking lugs are rounded for smoother locking and greater resistance to breakage. Another weak spot of the common AR bolt is the extractor spring, which is known to fail during intense firing schedules. The E3 bolt features dual extractor springs shifts the fulcrum on the extractor forwards to provide constant pressure on the case to improve “grip” when extracting from a dirty chamber or with dirty brass.

Apart from the bolt, the SR-15 also modernizes the lower receiver. The SR-15 features an ambidextrous bolt catch and selector in the same pattern found on the SR-25: a bolt catch on the right side of the receiver that can be depressed by the trigger finger positioned above the magazine release and the addition of a lever to the right side of the selector as well. This can ease reloads, however, it’s not as flexible as Radian’s ADAC lower receiver, which is mostly the same, but features the ability to lock the bolt back by depressing the magazine release while pulling the bolt back. A magazine release is also added to the left side of the receiver.

Rail wise, the SR-15 features KAC’s URX rail. While the first two versions of the URX were standard quadrails, the URX 3.0 featured a proprietary KAC negative space mounting system. The latest SR-15 features the URX 4, which is a standard M-LOK rail.

SR-15s also come with a KAC Quick-Detach muzzle device standard designed to accept their standard line of suppressors. While KAC suppressors were popular with SOF during the early years of the Global War on Terror, they were supplanted by Surefire Quick Detach Suppressors in the early 2010s, thus serious users of the SR-15 might find themselves changing out the muzzle device.

The SR-15 is a solid choice for most who are looking for a modern carbine, with one caveat. The SR-15 is an extremely expensive rifle for an AR, with an MSRP of over $2,500. At that price, most ARs are expected to shoot sub-MOA accuracy from the factory with quality ammo. But some owners have reported that their rifles are shooting 3 MOA from the factory. While these are isolated incidents, it’s possible that KAC’s barrel QC might not be up to the standard of the rest of the rifle.