Kashmir Is Under Double Lockdown: Coronavirus and the Indian Army 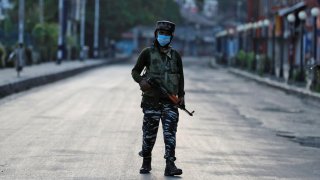 On 5 August 2019, Prime Minister Narendra Modi scrapped Article 370 of the Indian constitution, which allowed the state of Jammu and Kashmir to make its own laws, and cancelled Article 35A, which gave the state’s legislature the power to determine who was a permanent resident.

The Indian government then sent about 40,000 additional troops into the territory—already the most militarised zone on earth—to deal with the inevitable negative reaction to Modi’s decision. A curfew was imposed, schools and universities were closed, the internet was shut down, thousands of tourists and pilgrims were told to leave, and politicians were put under house arrest.

Last, but probably most consequential, Jammu and Kashmir was abolished as a state (the only Muslim-majority one in India) and replaced by two union territories, Jammu and Kashmir, and Ladakh, which are governed directly from Delhi.

Not surprisingly, this unilateral action by the Modi government was rejected by the majority of Kashmiris and opposed by two of India’s neighbours, Pakistan and China.

The Modi government claimed that the move was meant to bring peace and development to Jammu and Kashmir. Instead, it has only brought more violence, more misery and more uncertainty, particularly to the seven million Muslims living in the Kashmir Valley. And, because of Covid-19, Kashmir is now effectively under a double lockdown.

All aspects of society in Kashmir have been severely affected by these measures.

Undoubtedly, the greatest hardship for Kashmiris over the past year has been the very limited access they’ve had to the internet. While broadband was restored intermittently a few months ago after India’s supreme court ruled that the internet shutdown violated people’s freedom of speech and expression, mobile users are still limited to 2G networks and internet shutdowns are frequent.

Having limited internet access has been particularly onerous during the Covid-19 lockdown as healthcare workers try to deal with the fallout of the pandemic, and Amnesty International has called for services to be fully restored. It has also severely impeded the daily lives of students, traders and journalists.

The Kashmiri economy, which relies heavily on tourism, has been completely gutted. The Kashmir Chamber of Commerce and Industry projects a loss of about US$6 billion. Unemployment has soared to 18%, twice the national average; youth unemployment is a staggering 70%.

Security forces continue to behave appallingly and with impunity towards civilians, particularly during raids on homes in search of militants. According to the Jammu and Kashmir High Court Bar Association, nearly 13,000 people are still in detention without having been tried.

Last, but not least, 400,000 domicile certificates were granted to non-Kashmiri Indians in May alone, strongly suggesting that the Indian government intends to change the ethnic composition of Kashmir.

As would be expected, in neighbouring nuclear-armed Pakistan, Prime Minister Imran Khan labelled Modi’s revocation of Article 370 ‘illegal’ and warned that it would ‘destroy regional peace and security’. The Pakistani foreign ministry stressed that ‘Jammu and Kashmir is an internationally recognized disputed territory’ and that ‘no unilateral step’ by the Indian government could ‘change this disputed status’.

On the first anniversary of India’s actions, the Pakistani government unveiled a new political map of the country which integrated ‘Indian Illegally Occupied Jammu and Kashmir’ with the rest of the country for the first time since 1947. Oddly, but not surprisingly, the new map leaves the India–China border and Ladakh undefined. India’s reaction to the new map was immediate and predictable. It denounced the map as ‘an exercise in political absurdity’, stressing that ‘these ridiculous assertions have neither legal validity nor international credibility’.

Like Pakistan, China also opposed the change to Jammu and Kashmir’s status because of its own claims on Ladakh. China’s foreign ministry reiterated this position last week, stating that ‘any unilateral change to the status quo in the Kashmir region is illegal and invalid’.

More importantly, however, Modi’s decision on Jammu and Kashmir was also one of the reasons that China decided in May and June to forcefully challenge the Line of Actual Control (LAC), the de facto Sino-Indian border in Ladakh. While the situation has calmed down on the LAC—at least for the moment—China’s actions sent a powerful message to New Delhi: Beijing also has a stake in Kashmir. So now India has two fronts to contend with in that region.

With a few notable exceptions, such as Malaysia, Turkey and Iran, most of the Organisation of Islamic Cooperation countries have been reluctant to publicly criticise Modi on developments in Kashmir. India is a potentially massive market for the OIC, and no country is interested in jeopardising rich commercial ties. This reluctance to publicly support the Kashmiris’ plight has caused friction between Pakistan and Saudi Arabia, a country with which Islamabad has deep historical, religious, military and commercial ties.

European leaders, including Germany’s Angela Merkel, the UK’s Boris Johnson and France’s Emmanuel Macron, were initially slightly more forthcoming with their criticism of Modi, but not much has been heard from them since.

As for the other three members of the ‘Quad’—the US, Japan and Australia—their public silence on the Kashmir issue has been deafening. They don’t want to unnecessarily upset a critical—and at times wobbly—member of the quadrilateral security grouping. And after the recent clashes between India and China in Ladakh, there’s no appetite to ruffle Modi’s feathers on this issue.

It’s clear that the dreadful situation in Kashmir cannot continue indefinitely—nor should it, in the world’s largest democracy. Eventually, the Indian government will need to negotiate with Kashmiris and find a peaceful way forward.

But Modi is absolutely in no mood to do that right now. He has a majority in both legislative chambers and he’s liked by most Indians. Except for the scathing criticism from the Office of the High Commissioner for Human Rights, there is virtually no external pressure on the Indian government to change its ways.

Kashmiris will continue to suffer for some time yet.

This article by Claude Rakisits first appeared in The Strategist on August 17, 2020.