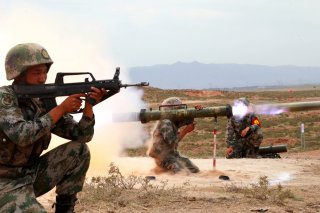 Here's What You Need To Remember: "The QTS-11, dubbed a 'strategic rifle' by Chinese military observers despite being a tactical weapon, gained its nickname because it not only has multiple functions and provided the strongest individual firepower in the world, but is also highly digitalized with sensors, a positioning system and a data sharing system, making it a cut above other tactical weapons."

The Chinese People's Liberation Army has showed off new infantry "super-weapons" including a knife-gun, a pistol that fires around corners and a "smart" grenade-launchers.

The prototype weapons might look outlandish and may never enter front-line service. But each boasts a rich history.

And China isn’t alone in experimenting with strange, new weapons.

A soldier armed with the new weapons would be capable of fighting 10 enemy soldiers, Global Times claimed. "It is rare for these advanced Chinese weapons to appear at a same place."

"I've seen a few of these before," Matthew Moss, a British historian and editor of the Historical Firearms blog, told The National Interest.

First up, the QTS-11 Individual Comprehensive Operation System, which "integrates the function of a rifle and a grenade launcher along with an advanced aiming module," according to Global Times.

"The QTS-11, dubbed a 'strategic rifle' by Chinese military observers despite being a tactical weapon, gained its nickname because it not only has multiple functions and provided the strongest individual firepower in the world, but is also highly digitalized with sensors, a positioning system and a data sharing system, making it a cut above other tactical weapons."

Global Times compared the QTS-11 to the U.S. Army's own XM29 Objective Individual Combat Weapon, a combination rifle and grenade launcher that the Americans tested, then discarded, in the early 2000s.

"It was too expensive to win bids from the U.S. Army," Global Times accurately noted.

"The QTS-11 is an interesting one, as it’s a take on the XM29 OICW," Moss said. "China and both Koreas are the only people playing with the concept, now." The QTS-11's grenade-launcher features a bolt action, making its simpler and potentially less expensive than the semi-automatic XM29 was.

The Chinese special forces troops also toyed with a combination gun and knife. "A knife-gun hides bullets inside what seems to be a knife, which can be fired in close-quarters combat," Global Times explained.

"As to historical examples, there are definitely many combination weapons including sword-pistols -- a concept that was alive right into the 20th century, actually," Moss noted.

"The Soviets were fans of the knife-pistol concept," Moss said, adding that weapons like that are "pretty redundant, really."

The Chinese troops also showed off a hinging pistol that can fire around corners.

"The corner-shot pistol system can be used so that the muzzle points to a different direction across a wall, while the soldier aims the weapon behind the wall with the help of a monitor," Global Times reported. "In dangerous urban warfare, the system allows the operator to accurately shoot targets without exposing himself to hostile attackers."

This weapon likewise didn't shock Moss. "As for corner pistols, I've never comes across anything very early, but it would not surprise me," he told The National Interest. "There was of course the bent-barrel weapons like the Krummlauf developed by the Germans during World War II for shooting at oblique angles."

"The weapons are made for special forces," Wei Dongxu, a Beijing-based military analyst, told Global Times. "Some standard troops will also use them in the future."