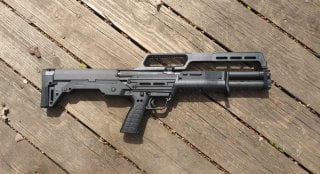 In the summer of 2019, Kel-Tec released their KS7, a stripped-down version of their earlier KSG. Featuring a single magazine tube and an integrated carry handle, the KS7 is cheaper, slimmer, and lighter than its larger cousin. But in shedding the additional magazine tube, does the KS7 become a better or worse gun?

According to Kel-Tec themselves, the KS7 was built to ergonomically improve upon the KSG. This is pretty evident in the design of the pump itself, unlike the original flat surface of the KSG, the KS7 features a prominent flare at the front of the handle to prevent the hand from slipping in front of the barrel.

The single-tube also improves the ergonomics of the shotgun’s reload. While still kind of awkward due to the position in the rear of the stock, the narrower chute resembles traditional shotgun designs and is far easier to load shells into than the wide opening meant to feed both tubes in the KSG.

Kel-Tec also said that they wanted the shotgun to be ready to go “out of the box” unlike the KSG, which didn’t come with iron sights and only had a top Picatinny rail. They saw the carry handle as an easy way to add integrated sights to the shotgun.

This can be seen as a hit and a miss. While it’s good to include sights out of the box, and the integrated carry handle sight might be enough for most shooters, most advanced users will likely replace it with a Picatinny rail, which negates the “carry” benefit of the carry handle. Kel-Tec likely decided to go with building the handle as a separate module instead of a Picatinny attachment that fits right on the rail to add balance and reduce manufacturing cost, but it is one that the customer must field in the end. Also, the KS7 doesn’t feature a Picatinny rail under the grip, if one prefers to use a vertical grip for additional safety when racking the shotgun.

The KS7 also incorporates a variety of M-LOK slots all over the shotgun for the mounting of various accessories, a welcome modernization from the mostly Picatinny attachment KSG.

Altogether, these changes and the affordable MSRP of only $500 (which will likely translate into a street price of $400) means that the KS7 is a decent shotgun to mess around with if one wants a compact bullpup with futuristic looks.

However, conventional shotguns are still probably better for most consumers. The ability to rapidly load a shell through the side ejection port is something that the KS7 doesn’t provide with its bullpup layout, and that capability is one of the things that makes shotguns unique and useful.

All in all, the KS7 is probably one of the best bullpup shotguns on the market. But bullpup shotguns are incredibly niche because they aren’t all that useful in the end. Conventional shotguns dominate the hunting, sporting, and tactical use cases, and the KS7 is unlikely to change that.

Charlie Gao studied political and computer science at Grinnell College and is a frequent commentator on defense and national-security issues. This article was first published in 2019.