Is the Kel-Tec PF9 Gun Worth It—And Better Than a Glock? 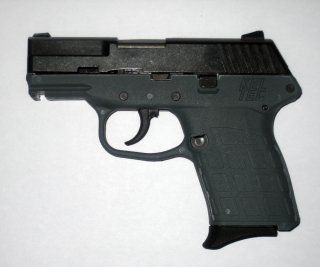 Key Point: The PF9's lightness is at the expense of everything else.

The world of thin subcompact 9x19mms is one of the most rapidly expanding sections of the gun industry. Most major manufacturers have a thin subcompact 9mm in their inventory. But in the early 2000s, there was not nearly as much variety. Kel-tec released one of the first ultra-thin and ultra-light 9mms in 2006 in their PF9. But in 2019 how does one of the original subcompacts stack up?

In short, not well at all. While Kel-tec’s PF9 is incredibly light and thin, it acquires those characteristics to the detriment of its reliability, “shootability” and durability. Subcompacts are also notorious for being difficult to shoot accurately. Other modern subcompacts have employed various strategies to mitigate those issues, but the PF9’s design does little to nothing on that front.

The PF9 features a double-action only (DAO) trigger, which makes it harder to shoot compared to single action or striker-fired triggers found in its competitors. While this can be trained around, the trigger pull is rather long when compared to other compact DAO handguns. Some companies make kits that can improve the trigger pull of the PF9, but these generally are of dubious safety, and the cost of the kit and the pistol often is around that of a better pistol.

The PF9 is often notorious for poor quality control, though this complaint isn’t restricted to the PF9 in the Kel-Tec lineup. Reports of guns failing to extract, or rounds getting jammed up on the feed ramp are common, with even Kel-Tec enthusiasts admitting that polishing up the internals for reliable operation is part and parcel of buying a Kel-Tec. Some owners have said they have sent their PF9s back to Kel-Tec over three times due to issues that keep happening with the gun.

While this is acceptable for a gun that will only be used on the range, the PF9 is marketed as a backup or concealed carry gun—applications that require reliability. While Kel-Tec’s PF9 may be cheaper than Glock or Sig Sauer’s offerings, it is harder to shoot, less reliable and less polished gun.

Some say the PF9’s saving grace is its affordability. The PF9 can be bought for less than 200 dollars in many cases—at less than half the cost of a Glock 43 or a Sig Sauer P938. But the S&W makes the M&P Shield for only 250 dollars.

The M&P Shield, while slightly larger and thicker than the PF9, features a decent striker trigger, a good reputation for reliability and durability, and tons of reliable aftermarket accessories. Capacity is also better, with 8 round magazines fitting flush, compared to the PF9’s seven-round flush fits.

As the subcompact 9mm market has expanded, the PF9 has been definitively left behind. There are better alternatives in almost every price range, from the affordable S&W M&P Shield to the more expensive Glock 43 for those who are used to Glock triggers. A long, fairly heavy DAO might have been an acceptable trigger in 2006, but in 2019 there are far better options.