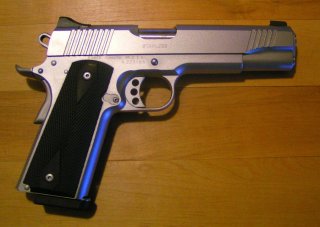 Here's What You Need To Remember: Founded in 1979, Kimber Manufacturing is a Troy, Alabama-based small arms manufacturer. Kimber spent the 1980’s striving to define itself in a highly saturated market, first dabbling in a wide spectrum of .22 LR products. Toward the end of the twentieth century, Kimber had found its niche: breathing new life into the 1911 platform.

One of the most prolific handgun designs in U.S. firearms history, the 1911 has spawned countless models over the twentieth- and early twenty-first century. But few manufacturers have done as much as Kimber to keep the 1911 relevant as a modern pistol platform. Here what makes Kimber’s 1911 line special.

First, some context. The original Colt M1911 has its roots in 1890’s efforts to design a “self-loading,” or semi-automatic, pistol. As its name suggests, the M1911 was adopted by the U.S. army just three years prior to the onset of World War I. The M1911 is a single-action, .45 ACP-chambered, short recoil-operated pistol that rose to prominence through its usage as a prolific military sidearm not only during the two world wars, but also in the Korean and Vietnam wars. The pistol has seen minor revisions throughout the century, but the core 1911 design has stayed remarkably consistent—for better and for worse. Both the consumer and military handgun markets have changed dramatically since the early twentieth century, and the 1911 has sometimes struggled to keep pace with the relentless handling, ergonomics, and reliability innovations of competing platforms. That’s where Kimber comes in.

Founded in 1979, Kimber Manufacturing is a Troy, Alabama-based small arms manufacturer. Kimber spent the 1980’s striving to define itself in a highly saturated market, first dabbling in a wide spectrum of .22 LR products. Toward the end of the twentieth century, Kimber had found its niche: breathing new life into the 1911 platform. Since then, the company has earned a well-deserved reputation as a leading 1911 manufacturer.

“Kimber builds the world’s finest 1911 pistols right here in America—something that makes sense, as few things are as American as a 1911 .45 ACP,” reads Kimber’s introduction to its vast online catalog of 1911-style firearms.

Kimber’s design approach to its 1911 lineup hinges first and foremost on customizability. Those looking for a conventional 1911 format should feel right at home with the top-selling Stainless II .45 ACP family, offering checkered grips, fiber optics front sights, and a stainless steel construction. From there, Kimber offers enthusiasts, collectors, and specialists numerous options for a bespoke 1911 experience. Armed with pre-mounted 6.8-inch venom optic red dot sights, improved feed ramp, and host of ergonomic changes, the Kimber Aegis Elite Custom Optic Installed (OI) is a high-performance option that oozes quality at its price point. The 1911 CDP is a plug-and-play personal defense solution that comes with some custom features including a commander-style hammer and three-dot night sights, while the Super Jagare is a 10mm, 1911 hunting pistol. Speaking of calibers, a great chunk of Kimbers’ 1911 range comes with 9mm— and somewhat less commonly, 10mm—choices in addition to the traditional .45 ACP option. Finally, the special edition lineup will appeal to handgun collectors and consumers seeking a particular aesthetic. The Amethyst, Sapphire, and Rose Gold personal defense pistols are nothing if not visually striking; meanwhile, the new Rapide (Black Ice) is a somewhat more subdued performance option for enthusiasts looking to make a strong statement.

Kimber’s 1911 lineup is a remarkable achievement in diversity and versatility, revitalizing a 110-year-old platform with a dizzying array of performance improvements and customization options. If you’re in the market for a 1911-style pistol, Kimber quite likely has you covered.