The Korean War May Have Prevented Nuclear Armageddon 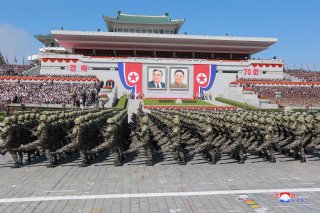 Here's What You Need to Remember: The global hotspot wasn’t the Korean Peninsula but Yugoslavia, and that country heated up because Marshal Josip Broz Tito refused to let Joseph Stalin push him around.

Many companies and business publish internal newsletters or magazines, and America’s intelligence services are no different. The CIA runs the pulpy fount of weirdness that is Studies in Intelligence while the NSA puts out the Cryptologic Quarterly.

The agencies often declassify and digitize back issues of these magazines for the public. The articles are a wealth of weird, wonderful and fascinating takes on historic and current events written by people who have access to secret information not privy to the public.

A recently declassified article from a 2000 issue of Cryptologic Quarterly is a doozy.

Fifteen years ago, the historian and blogger John Schindler worked for the NSA, where he wrote an article for its internal magazine about how the Korean War averted nuclear Armageddon. Dodging Armageddon: The Third World War That Almost Was, 1950 tells the story of how a clash between two communist dictators led to a buildup of troops in Eastern Europe, forced the West to consider launching nukes and brought the world to the brink of annihilation.

Schindler’s sources make the account far more interesting than a typical history. As an NSA analyst, he had access to secret documents and sources off-limits to other academics. The NSA recently declassified the article, but some of it — including Schindler’s name — are still redacted. We know he wrote it because he claimed responsibility on his website.

“By dispatching the 24th Infantry and 1st Cavalry Divisions from comfortable occupation duty in Japan to death and destruction in Korea in mid-summer 1950,” Schindler asserted. “The United States actually did nothing less than save the world from a global conflagration.”

He makes a strong case. The global hotspot wasn’t the Korean Peninsula but Yugoslavia, and that country heated up because Marshal Josip Broz Tito refused to let Joseph Stalin push him around.

Tito was an ardent communist unconcerned with provoking Western aggression. After World War II, he supplied communist rebels in neighboring Greece with supplies, support and troops. Stalin didn’t like it. He wanted Tito to pull back and the Yugoslav dictator refused.

Tito’s refusal to fall in line enraged Stalin, who decided to get rid of Tito by any means necessary. “Stalin’s declaration of war on the Titoist heresy was initially greeted with unconcealed glee by the U.S. government,” Schindler wrote. “To our ambassador in Moscow, the split was nothing less than ‘a Godsend to our propagandists,’ offering Washington novel options in the budding Cold War.”

As the Cold War bloomed and the Korean War began, Stalin obsessed over Tito. “Stalin was determined to exterminate the Titoist menace,” Schindler explained.

“As Robert Conquest, the preeminent scholar of Soviet totalitarianism, explained, the Yugoslav upstart became ‘a major villain almost at Trotsky’s level in Stalin’s personal psychodrama.’ Stalin planned to employ the same methods which had silenced Trotsky — propaganda, intimidation and assassination.”

Béla Király, a Hungarian army officer who defected to the West, explained just how bad the situation had become. “As Kiraly recounted,” Schindler wrote. “A Soviet colonel who visited his office in July 1951 castigated him for teaching officers the geography of any country but Yugoslavia: ‘Your students must be taught one battleground only, the territory of the enemy, Yugoslavia.’”

“Soviet invasion plans forecast a massive push by an infantry-heavy first echelon,” Schindler continued. “Composed of Hungarian and Romanian troops; the brunt would be borne by the 300,000-strong Hungarian People’s Army, which would pierce Yugoslav defenses in the flat northern province of Vojvodina, opening the door to Belgrade, which would be taken by mechanized Soviet forces forming the invasion’s second, decisive echelon.”

In January 1951, 80,000 Hungarian troops ran a simulated invasion of Yugoslavia right along the country’s border. To the West, it looked as if Eastern Europe would soon fall to aggressive Soviet forces. “The CIA concluded that Yugoslav resistance was dependent ‘on the degree and promptness of Western assistance,’” Schindler wrote.

But the West lacked the conventional ground troops to resist such a force and those it did have were tied up in South Korea. To stave off a Soviet invasion of Yugoslavia, America would have to use nukes.

“Within weeks of the invasion of South Korea, Washington had accepted in principle that due to the dearth of conventional forces, atomic weapons would probably have to be used to defend Yugoslavia against Soviet attack,” Schindler explained.

America’s ‘freedom of action to employ atomic weapons in such a localized conflict if the situation dictates’ was a jealously guarded prerogative, as well as the strategic logic underpinning NATO policy towards Yugoslavia.”

Luckily, it never came to that. The rapid Western response to the invasion of South Korea startled Stalin. “If America would commit two divisions at once,” Schindler wrote. “And eventually more than a half-dozen, to save South Korea, what might it do to rescue the strategically vital Tito?”

Stalin continued to obsess over Tito — his intelligence services attempted more assassinations — but the Man of Steel backed away from a military solution. For Schindler, making Stalin blink was one of the most important, if not the most important result of America’s involvement in the Korean War.

“By their sacrifices, the doomed men of Task Force Smith, the heroes of Inchon, the scarred veterans of Chosin, prevented Armageddon,” he wrote. “It is fashionable today to hail the veterans of the Second World War as ‘the kids who saved the world,’ and rightly so. Yet the fine young men of 1950 did no less, though few knew it then — or now.”