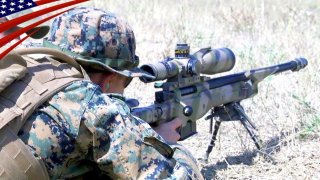 Here's What You Need to Remember: It was one of Accuracy International’s L115A3s that was used in 2009 in Afghanistan by British Army sniper Craig Harrison when he set a world record for the longest confirmed kill. In fact, Harrison made two consecutive confirmed kills at 2.47 km, followed by a third shot that disabled the enemy’s machine gun, which was an even smaller target than the two insurgents.

Military rifles have long had a more utilitarian appearance but for good reason. The rifles needed to be durable, rugged and even useable as a heavy club if all else failed. The exception to that rule has been sniper or marksmen weapons, which have been more refined. The craftsmanship shows through with the best sniper rifles, and this is certainly the case with Accuracy International’s L115A3 long-range rifle.