Laser-Guided Rockets: The F-16's Answer to Drone and Missile Attacks? 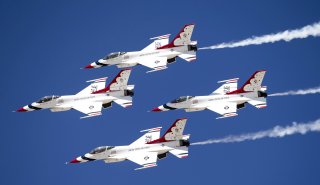 Here's What You Need to Remember: For now, merely the ability to affordably shoot down cheap drones and missiles with a cheap rocket instead of hugely expensive AMARAMS and Sidewinders is a noteworthy achievement, especially given the recent proliferation of deadly drones even in the hands of non-state actors.

To be clear, it’s not yet certain the Air Force will move ahead to operationalize the air-to-ground weapon in the air-to-air role.  However, it has explicitly stated it is considering APKWS as anti-drone and cruise missile role.

Sébastien Roblin holds a Master’s Degree in Conflict Resolution from Georgetown University and served as a university instructor for the Peace Corps in China. He has also worked in education, editing, and refugee resettlement in France and the United States. This article is being republished due to reader interest.