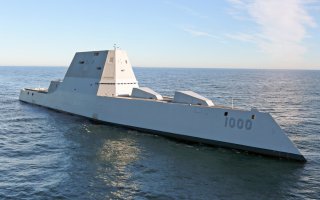 Handling the rough seas of major maritime combat is, of course, an indispensable element of the kind of Naval warfare anticipated for the Zumwalt. The ship’s cutting edge Tumblehome, wave-piercing hull can present a bit of a paradox; in one sense the next-generation hull brings improved maneuverability, speed and wave-cutting technology, it has led to questions as to just how stable the ship would be in the event of extremely rough seas. The Navy itself, Smith said, has has some questions and been wanting to assess and validate the ship’s ocean stability. Recent calm and heavy weather trials, Smith said, have added new levels of confidence regarding the ship’s combat ocean properties.

“What I will tell you is all the engineers and scientists of the world are excited about how this is going. We were not sure with the dynamic stability,” Smith said. Smith said the ship was able to demonstrate combat stability up to the low end of Sea State 6 -- a World Meteorological Organization standard specifying 13 - to - 20ft waves and “very rough” seas

“The Navy is very interested in this platform and they are excited to have it in the Pacific,” Smith said.

Osborn previously served at the Pentagon as a Highly Qualified Expert with the Office of the Assistant Secretary of the Army - Acquisition, Logistics & Technology. Osborn has also worked as an anchor and on-air military specialist at national TV networks. He has a Masters Degree in Comparative Literature from Columbia University. This article first appeared last year.