Lasers Could Be a Gamechanger for Navy Submarines 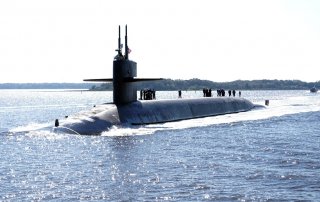 Here's What You Need to Know: Navy subs will become giant batteries, supplying juice to power-hungry lasers, or underwater platforms, or equipment used by special operations forces. But first, the Navy must develop an electrical connector embedded in the sub’s hull.

Will U.S. Navy submarines be armed with laser weapons?

That’s the implication of a new Navy research project.

At first glance, the project seems fairly routine engineering: developing connectors that will allow transmission of hundreds of kilowatts of electricity through a submarine’s hull.

But what’s interesting is what all that electricity will be used for. “The Navy seeks technologies for transmitting high electrical power required for operating Directed Energy (DE) weapon systems from inboard the submarine to an outboard DE system, submersible platform, special operation, etc.,” states the research proposal.

In other words, Navy subs will become giant batteries, supplying juice to power-hungry lasers, or underwater platforms, or equipment used by special operations forces. But first, the Navy must develop an electrical connector embedded in the sub’s hull. “Currently, the Navy needs to tow the generator to support a similar system,” the proposal notes.

Yet the fact that the proposal mentions an “outboard” directed energy weapon is interesting. “By ‘outboard,’ the proposal could mean a system attached externally to the submarine, but that is only connected to the inside of the submarine via external hull penetrators,” says Bryan Clark, a former Navy submarine officer who is now an analyst for the Center for Strategic and Budgetary Assessments think tank. “These penetrators are electrical connectors that provide an electrical circuit between the inside and outside of the submarine, but that are built into the hull so cables do not need to pass through the hull.”

Other possibilities include a mast-mounted laser. “Either the laser could be in a mast or it could be in the sail and the sub would have to surface at least partially,” Clark explains. “As opposed to a gun or missile, a laser can be configured such that the laser generator is vertically aligned along the inside of the mast, and the laser light could be sent to the beam director via mirrors.”

Indeed, Optical Physics Company, a California-based technology firm, has designed a beam director—which steers the beam toward the target—for a mast-mounted submarine laser. “OPC has designed such a beam director with the right form factor for insertion into a submarine mast,” says the description on the company’s Web site. “This beam director can track the target and aim an approximately 12-inch diameter beam onto the target. The beam director can optionally contain adaptive optics components to condition the wavefront of the HEL [high energy laser] beam and compensate for the atmospheric distortions that reduce beam effectiveness in a maritime environment.”

If the Navy can develop electrical hull connectors, power generation and other systems needed for a submarine-mounted laser weapon, the potential could be enormous. A stealthy submarine emerging from the depths to fire a surprise laser shot could be devastating.

“Above the water, a 100-300 kilowatt laser would be powerful enough to destroy small UAVs, damage larger aircraft, damage optical sensors, or defeat slow anti-ship missiles,” Clark says. “Underwater, a laser could be used for communications, but that would only work at specific frequency ranges and would require much lower power levels.”