Laughable: Why China’s Mysterious “UFO” Is Nothing 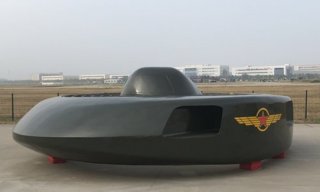 Here's What You Need to Remember: While strange-looking, ducted-fan designs have been around for decades, periodically falling in and out of favor among plane-developers without ever offering any clear advantages over conventional aircraft.

A Chinese firm claimed it’s developing a flying saucer-like vehicle for military use.

Don’t be surprised or impressed. What Chinese media described as a “sci-fi-like aircraft” in fact is a simple ducted-fan vehicle. Instead of mounting its propellers in forward-facing nacelles or on top, like planes and helicopters do, a ducted-fan craft contains its propeller inside a large housing -- the “duct.”

While strange-looking, ducted-fan designs have been around for decades, periodically falling in and out of favor among plane-developers without ever offering any clear advantages over conventional aircraft.

“China has showcased an attack helicopter model that looks just like a flying saucer, a scale prototype of which is scheduled to make its maiden flight in 2020,” Global Times reported.

Nicknamed “Super Great White Shark,” the 20-foot-long saucer vehicle was on display at the 5th China Helicopter Exposition in Tianjin.

According to the information board at the exposition, inside the ring there is a coaxial rotor system with a diameter of [16 feet], which will likely provide vertical lift. On two opposite sides of the ring, both parallel to the direction the cockpit is facing, there are two turbojet engines that could provide huge horizontal thrust for high speed movement.

Two pilots can fit in the cockpit, and can steer the direction of the aircraft by controlling a set of rudders located under the rotor system. The rudders could also work with the rotor system to provide a small horizontal thrust for low speed movement.

The flying saucer could boast a maximum takeoff weight of 13,000 pounds, a top speed of 400 miles per hour and a ceiling of 18,000 feet, Global Times reported. “Its fuselage is coated with stealth materials.”

But it’s unclear whether the ducted-fan saucer ever would perform better than a conventional helicopter or airplane. As far back as 1956, the U.S. Army and NASA experimented with a plane with ducted-fan propulsion.

In 1960 John Campbell, then a NASA researcher, explained to lawmakers the advantages and disadvantages of the Army’s Doak VZ-4 and other ducted-fan designs. “A ducted fan might simply a propeller with a ring or shroud around it,” Campbell said.

“Also it is suggested that the shroud serves as a guard,” Campbell said, meaning a ducted-fan vehicle could safely operate in close proximity to people without risking injury. “Whether these advantages outweigh the disadvantages of these ducted fans remains to be seen. Actually the ducted fan has the disadvantage of the additional weight and drag of this duct itself, and also it introduces several undesirable stability characteristics.”

The market certainly hasn’t rewarded efforts to develop ducted-fan designs. The Army never seriously pursued the DV-4 or other ducted-fan vehicles. Israeli firm Urban Aeronautics for years has been working on ducted-fan aircraft for military and civilian use, but the company has yet to secure firm orders.

Will the Chinese flying saucer be any different? “Attracted by the futuristic design of the aircraft, Chinese military observers pointed out that the aircraft's high-speed and stealth capabilities could give the weapon an edge on the battlefield,” the Global Times stated, without specifying exactly how the flying saucer is stealthy.

But the Chinese flying saucer seems likely to meet the same fate as older ducted-fan designs, Global Times conceded. “Others questioned the helicopter, saying that it could be unstable and might not be able to fly safely. They noted that foreign countries including the U.S. had made experiments with similar ideas in the past which had failed to be put into practice.”

“Chinese military experts said on Friday [Oct. 11, 2019] that though the aircraft is highly experimental and may not be put into practical use anytime soon, it is beneficial to China's technology development for future helicopters,” Global Times concluded.