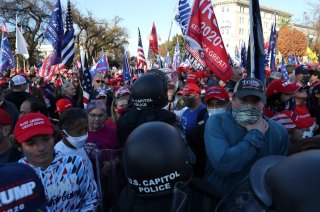 After rioters flooded the U.S. Capitol building on Jan. 6, there was an immediate call for those who overran officers on the scene and swarmed the House and Senate floors, as well as congressional members’ personal offices, to be identified, arrested and prosecuted. The coordinated law enforcement response to this incident is massive.

As researchers who study criminal justice, we see that law enforcement agencies are accessing large amounts of information via technological sources to investigate the attack on the U.S. Capitol building. High-definition security cameras, facial recognition technology, location services acquired from cellphones and third-party apps, and accessing archival evidence on social media are all used to identify perpetrators of crimes and tie them to specific places and times.

In the days since the breaching of the Capitol, information has flowed continuously to law enforcement with names and/or images of suspected participants in the unrest. Facial recognition technology can be used to compare images obtained by law enforcement – particularly those images taken from the network of security cameras within and outside the Capitol complex – to positively identify persons of interest.

Facial recognition systems work by matching a face in a video or photo with a face in a database that is associated with a person’s name and other identifying information. Beyond using public records, law enforcement agencies have been turning to private companies to access large databases of identified faces. A growing body of evidence shows the large amount of data some companies have been collecting from social media and other publicly available sources, as well as from CCTV systems in public spaces around the globe. Law enforcement agencies can simply purchase the services of these companies.

The technology exists to identify individuals participating in violent encounters in public spaces in real time using the soon-to-be-completed national ID database. This could result in some extremist groups going off the grid to avoid identification.

Investigators are being aided by many of the participants in the events of Jan. 6 themselves who posted accounts of their activities on social networks. In addition to the participants who breached the barricades of the Capitol, many bystanders documented the happenings. Social media companies are assisting law enforcement in accessing content that may be useful to locate and prosecute specific individuals.

Some of the earliest subjects who were arrested after the events of Jan. 6 were previously known to law enforcement agencies around the nation, their involvement confirmed by social media postings. Reports have emerged that individuals and groups already under surveillance by law enforcement agencies nationwide via their activity on social media, including suspected white supremacists on the FBI’s terrorist watchlist, were contacted by officers before the individuals traveled to Washington to attend the “Stop the Steal” rally.

Information from social media is also assisting authorities in determining the extent of planning among individuals and groups that were involved.

There is some disagreement within the law enforcement community about the pros and cons of restricting the ability of extremists to communicate on platforms such as Twitter, Facebook, Instagram, TikTok and Parler. The benefit of restricting extremists’ access is hindering communication in the hopes of preventing similar attacks. There is emerging evidence that extremist groups are moving their social media conversations to password-protected sites and to the darknet, where an individual’s anonymity is protected. This migration might hinder extremist groups in recruiting and propaganda efforts, but it’s not clear if it has an effect on the groups’ organizing.

The downside of driving extremists to less-visible online platforms is that it makes it difficult for law enforcement to gather information needed to bring cases against those who participate in criminal incidents. Their virtual footprints become harder to follow.

Identifying a person – particularly someone not previously known to law enforcement – is just one piece of evidence needed to issue an arrest warrant. Empirical information that puts the suspect at the location of a crime when that crime occurred often provides the corroboration courts need to issue a warrant.

The vast majority of participants in the Capitol unrest carried mobile devices with them and had them powered on, which makes it possible for law enforcement agencies to determine the movements of the cellphone’s owner. Even if users have location services, cellular data and Wi-Fi disabled, law enforcement has access to technology that can determine the location of a device at a specified time.

But location data is useful only when coupled with other evidence of a subject’s involvement in a criminal incident, such as photos and video. For instance, it is doubtful whether simply being in the vicinity of the Capitol during the unrest is sufficient. Location data may not be precise enough to discern whether a device was on someone’s person behind previously established barricades outside the Capitol building or if that device was inside House Speaker Nancy Pelosi’s private office, particularly with thousands of mobile devices clustered in one small geographic space inside structures that can obscure signals.

Tips from the public

One aspect of criminal investigations that has not changed with the rise of technological surveillance is the value of information provided by eyewitnesses and associates of individuals suspected of perpetrating crimes. In the days since the storming of the Capitol, many tips have come into law enforcement from friends, relatives, ex-spouses, neighbors, co-workers and others who indicated they either saw images of someone they knew participating in the unrest on television or on social media, heard them boast of their exploits or heard from a third-party that they had participated.

The FBI, especially, took advantage of the constant media attention on the unrest at the Capitol to ask the public for tips and information, and had established a hotline to gather this information within hours of the incident. It certainly helps criminal investigations when perpetrators are willing to be recorded and photographed, and when they provide their names, ages and hometowns to reporters.

Technology expands the reach of law enforcement investigations, and, combined with tips from the public, makes it more difficult for participants in mob actions to become lost in the crowd. However, these technologies raise the question of whether they can and should be used in the future to prevent these types of large-scale violent incidents from occurring in the first place.