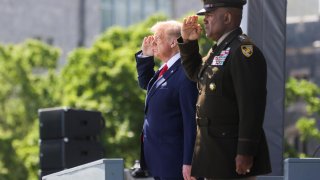 The erosion of American naval primacy has been one of the most under-reported national scandals of the past decade. Even as the United States rang up record peacetime defense bills and used purportedly counterterrorism Overseas Contingency Operations (OCO) money as a slush fund, the U.S. Navy was stagnant. The U.S. currently mans 293 warships, a tiny bump from the 288 of 2010. Despite President Trump’s campaign promise of a 355-ship navy, the administration is requesting $6 billion less for shipbuilding in 2021 than it did last year. At just eight hulls, this year’s proposed Navy shipbuilding budget is the smallest since 2015. Probably nowhere in the entire U.S. defense budget is the gap between rhetoric and reality larger than in Navy shipbuilding.

The U.S. National Defense Strategy and an appraisal of recent events both tell us that China is the preeminent foreign threat to American national security and prosperity. The People’s Liberation Army Navy (PLAN) has not spent the past decade adrift; from 2015 to 2017, China launched twice the naval tonnage U.S. shipyards did.

Conflict with China can hopefully still be avoided. Ongoing competition primarily takes place through the non-military elements of national power: diplomacy, information, and economic rivalry. But should a war between China and America break out, it will be first and foremost a naval fight.

In an overloaded U.S. defense budget that was projected to stay essentially flat even before the coronavirus pandemic began, something has to give. After large OCO cuts via Afghanistan withdrawal and cutting the nuclear triad to a dyad, the next logical place for cuts is the U.S. Army.

The world is not flat: America’s providential strategic geography still leaves it with (militarily weak) friends on two sides and large moats on the other two. In a time of hard choices, there is simply no sound case for large U.S. land forces. (The Marine Corps is also too large, but under Gen. Berger the Marines are at least integrating more tightly with the Navy, cutting some force structure, and orienting on what they can bring to a war in the Pacific.)

The Army already keeps 52 percent of its force structure in the reserve component (Army Reserve and National Guard), far more than the other services. Yet this ratio can and should go higher.

The Army’s heavy forces—armor brigade combat teams (BCTs)—are its most important for a major war, but they are slower to deploy and less versatile than light units (infantry BCTs). The Army currently fields 13 infantry BCTs and 11 armor BCTs in the active component. A National Guard BCT costs less than a third of an active duty one. Shifting two of each unit into the Guard and cutting four of the Army’s seven active duty Stryker brigades would yield about $18 billion in annual savings.

The active component Army also fields 11 Combat Aviation Brigades (CABs). While assault support and other helicopter lift assets (including casualty evacuation) are critical, the worth of attack helicopters is far more questionable. Army Apaches were extremely vulnerable even in Iraq in 2003. With modern air defense networks proliferating to even third-rate powers and the Air Force justifying its F-35 fleet partially on the grounds of survivability in modern war, the continued viability of a huge attack helicopter fleet should be examined. At a minimum, an Apache is an extremely expensive way to kill a tank. Army CABs cost about $1 billion each annually.

Stationing more Army units in Europe, even as tripwires in the Baltic states, should be rejected. If near-frontline European NATO members, like Germany, can’t be bothered to credibly defend their allies or even themselves, why should America pay the price? European Defense Initiative funding in the FY2021 budget is down slightly to $4.5 billion. It should be cut altogether.

It is galling that the U.S. Navy requires a bailout in all but name, after squandering decades and hundreds of billions of dollars on procurement disasters like the Zumwalt destroyers, Ford-class carriers, and the farcical Littoral Combat Ships. But in the post-pandemic world, the United States will finally be forced to make hard choices and prioritize. Geography and strategy dictate putting the U.S. Navy first and the Army last in the years ahead.

This article by Gil Barndollar first appeared at Defense Priorities.