The Lewis Gun was Revolutionary 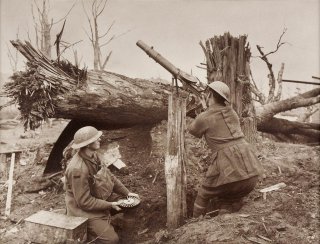 It must be an automatic rifle, Robert Jordan thought. “How much does it weigh?” he asked.

“One man can carry it, but it is heavy. It has three legs that fold. We got it in the last serious raid. The one before the wine.”

“How many rounds have you for it?”

“An infinity,” the gypsy said. “One whole case of an unbelievable heaviness.”

Sounds like about five hundred rounds, Robert Jordan thought. “Does it feed from a pan or a belt?”

“From round iron cans on the top of the gun.”

— For Whom the Bell Tolls by Ernest Hemingway

World War I is supposed to be about men stuck in the mud of trench warfare, a static stalemate with little movement.

Yet there were numerous patrols and attacks along the Western Front, the kind of action where portable automatic firepower could give soldiers a tremendous advantage.

The Maxim and Vickers machine guns of the time were effective but heavy.  Those weapons were for infantry support from fixed positions.

But there was a light machine gun that saw plenty of action on the ground and in the air. It was the Lewis Gun, an all-but-forgotten weapon today that was ubiquitous on the battlefields of The Great War because it could be carried, mounted on vehicles and even placed on airplanes.

The Lewis Gun had a respectable post-World War I career, as well. Hemingway wrote about the weapon in his classic novel about guerilla operations during the Spanish Civil War, a war he saw first-hand as a reporter. Republican forces in Spain had many Lewis guns. They either got them as gifts from Soviet Union or captured them from the Nationalists.

Hemingway’s guerillas might complain about how heavy a Lewis Gun was when attached to a Vickers-designed tripod. But on its own, the Lewis Gun had a simple bipod and weighed 28 pounds — less than half of the weight of a Vickers machine gun, which was also water-cooled and was more complicated to set up.

Desperate for weapons after their defeat at Dunkirk in 1940, the British pressed mothballed Lewis guns into service with the Home Guard. There were even some Lewis guns in the hands of North Koreans and the Viet Cong during the 1950s and 1960s.

It’s a weapon that lives up to a nickname earned during The Great War — “The Belgian Rattlesnake.”

No doubt about it, the Lewis Gun had a distinctive look. A large aluminum cooling shroud enclosed the barrel and a top-mounted pan magazine fed ammunition into the weapon. The pan magazines held either 47 or 97 rounds.

Originally chambered for the British .303-caliber cartridge, there was also an American version that fired the .30-06 round. Both are hefty cartridges that bring mayhem to the battlefield — and the Lewis Gun could fire up to 600 of the rounds per minute.

There was even a version chambered in 7.92-by-57-millimeter Mauser that was produced in limited numbers.

The Lewis Gun boasted raised blade- and tangent-leaf sights, as well as a removable wooden rear stock that could be replaced with a handle so an operator could more easily traverse the gun on a tripod.

Col. Isaac Newton Lewis of the United States Army designed and perfected his eponymous weapon in 1911 based on ideas from fellow gunmaker Samuel Maclean. The result was an innovative weapon for the time that put enormous firepower in the hands of one man, rather than the crew of up to six men needed to operate weapons such as the Maxim Gun.

The U.S. Army should have adopted the Lewis Gun, but didn’t because of animosity between Lewis and Gen. William Crozier, the chief of the Ordnance Department — probably resulting from differing politics.

Crozier blocked the Army’s adoption of the Lewis Gun — a foolish move that kept a perfectly capable light machine gun out of the hands of U.S. troops. It also infuriated Lewis, who reportedly sputtered that he had enough of being “slapped by rejections from ignorant hacks.”

In 1913, Lewis resigned his commission, packed his bags and headed for Liège, Belgium, where he opened a firearms factory he called Armes Automatique Lewis.  He also established a working relationship with The Birmingham Small Arms Co., where British engineers helped him eliminate manufacturing complications.

War-ready Europe saw what stubborn U.S. Army brass chose to ignore — a man-portable machine gun that could spray rounds up to 650 yards away.

Soon, the Belgium army began purchasing the .303-caliber version of the Lewis Gun in limited quantities. In 1914, BSA purchased a license to manufacture the Lewis Gun in Britain, a move that made Lewis a very wealthy man.

Even in small numbers, the Lewis Gun terrorized the German troops who faced the weapon’s rapid fire and useful portability in the hands of Belgian troops. It was the Germans who dubbed the Lewis Gun “the Belgian Rattlesnake,” owing to the gun’s sound and the “bite” it took out of advancing men.

By 1917, every British Army infantry section had a Lewis Gun, a decision that increased a Tommy’s ability to fire and maneuver.

Back in the United States, the Navy and the Marine Corps didn’t have the same qualms about the Lewis Gun that the Army did. Both adopted the M1917 .30-06-caliber version manufactured by Savage Arms — and both loved it.

In particular, Marines trained regularly with the Lewis Gun. But when they deployed to France as part of the American Expeditionary Force, the high command replaced their Lewis Guns with the French Fusil Mitrailleur Modele 1915 CSRG, otherwise known as the Chauchat.

Perhaps the most innovative use of the Lewis Gun was on airplanes. World War I was the first war where aircraft figured prominently, and both the British and French discovered that with its cooling shroud removed the Lewis Gun was ideal for aircraft because of its light weight.

Before the war, the Lewis Gun was the first machine gun ever fired from an airplane. In 1912, Capt. Charles Chandler of the U.S. Army fired an early version of the weapon from an airborne Wright Model B Flyer.

As time went by, other weapons diminished the importance of the Lewis Gun. The Browning Automatic Rifle and the Bren Gun replaced the Lewis in American and British units, respectively.