Lockdown Puts Zoos at Risk of Closing for Good: Why We Can't Allow this to Happen 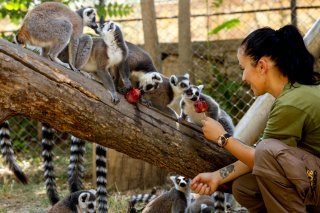 The coronavirus pandemic has caused significant disruption to all businesses, but zoos seemed to have struggled more than most. Around the world all have recognised the same challenge: without paying visitors, their survival is at stake.

Some have already lost the battle, including the small but unique coastal zoo Living Coasts in Devon, England, which had to close permanently. Others – from the US to France – have reported cancelling development projects, pulling back on vital conservation work or laying off staff.

The main reason for this is that they have high fixed costs: you can’t furlough the animals, so you can’t furlough those caring for them. Due to the ever-increasing expectations to maintain the highest possible animal welfare, zoos also heavily invest in their facilities, in many cases using bank loans. Combine this with highly seasonal income and zoos found themselves in the middle of a perfect storm when lockdown hit.

Despite zoos in many countries being reopened, in most cases they have to cap daily visitor numbers in line with government guidelines, resulting in further losses of revenue in their peak season. UK zoos are especially exposed to these effects, as unlike many zoos in Europe, the US or Australia, they don’t receive any government funding for their running costs.

UK zoos raised the alarm at the beginning of the lockdown, but the government was slow to acknowledge their unique needs. After months of negotiation it agreed to provide a £100 million emergency zoo fund, but access to it has severe limitations. Despite the best efforts of the zoo community, it’s essentially designed to prevent a large-scale animal welfare crisis only. Even in the financially fitter zoos, redundancies are well underway, directly non-animal related positions being more at risk. This is threatening the very core function of zoos: education, research and conservation.

Turning tourism income directly into conservation spend is a unique capability of zoos. Thanks to the more than 700 million visitors they receive annually, zoos around the world spend over $350 million a year on conservation. More than 10% of this comes from UK zoos. At least 77 species that are extinct in the wild are currently only maintained in zoos and botanical gardens.

Zoos also published thousands of scientific studies in the past couple of decades. The European zoo research output tripled in the past 10 years alone. Close to 250 academic institutions carry out research in collaboration with UK zoos – most of these are part of the training of the next generation of scientists.

The existence of good zoos allows me to contribute to vital research and field conservation projects across five continents. A big part of my work now is to pass on the torch (and some of my knowledge) to students and professionals – and I can’t do this without zoos.

The future of zoos

The current pandemic is the direct result of our reckless and ruthless mismanagement of nature and our distorted relationship with wildlife. It’s ironic that it also threatens one of the few institutions, zoos, which are dedicated to study and preserve nature and educate us all about a more balanced way of living in peace with it.

It is crucial that zoos continue to innovate, as they have throughout their history. They are looking for new ways to deliver conservation education better using technology, or even to create new research opportunities in the chaos. The challenge is to find ways that these can provide sustainable income streams.

In the past 200 years, zoos around the world became true conservation powerhouses and one of the most accessible ways to reconnect our urbanising species with nature. Yet in the UK they are remarkably undervalued compared to other cultural institutions. As leading zoo figures, including myself, put forward in a recent white paper for the government authored by the largest UK charitable zoos and aquariums, the best evidence, facts and figures all show that good UK zoos need, and well deserve, the support of the government.

There is a compelling argument, and indeed many international examples, that partial or full government funding for some of the best UK zoos could lead to further increased conservation and science output, and provide safe and healthy places to visit for families.

Considering the physical and psychological benefits of visiting modern zoos, one innovative way to increase funding could be to include zoos in the new green prescription system. Evidence suggests that a visit to the zoo is literally good for you: it can lower your blood pressure and stress hormone level, while making you happier, more energised and less tense.

Zoos provide exceptional value for money: one could “prescribe” an annual pass for well under £100 a year, providing countless opportunities to exercise and reconnect with nature even during a pandemic. Over 80% of the UK population is urban, for them zoos can provide one of the very few easily accessible and affordable green spaces.

Many zoos also experienced great support in the days of hardship. Private donations ranging from £10 to thousands of pounds came from their local communities. Though clearly this is not enough to keep them running without the usual income, it proved that there is a significant support for their existence and that, for many of us, zoos mean more than just a simple day out. Examples from the USA show that this has a great potential, as many American zoos have complete animal habitats, veterinary and research facilities or conservation programmes funded completely by wealthy private donors.

But ultimately zoos need stability and paying visitors. A recurring cycle of lockdowns would inevitably be lethal for many of them. Clear government guidelines and adequate financial support, which recognises the complexity of zoos beyond the simplistic animal welfare support scheme, is one of the most important ways to save zoos for the future. In turn, they will continue to save wildlife and wild places around the globe.