Look Closely: This Plane Saved the Soviet Union from Hitler 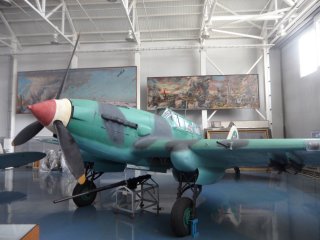 Here's What You Need To Remember: The Ilyushin Il-2 Sturmovik was durable and easy to produce - they came off Ural assembly lines by the thousands - and were exceptionally good at exactly one thing: destroying Nazi tanks.

If you had to choose one plane that defined Soviet air power in World War II, there can be little doubt it was the Il-2 Sturmovik “Flying Tank,” an armored ground-attack plane that hammered Nazi Germany’s tanks and troops from the opening days of Operation Barbarossa to the fall of Berlin.

Despite sustaining horrifying losses to opposing fighters and flak guns, Soviet industry fed tens of thousands of the sturdy warplanes into the struggle, making it the most extensively produced military aircraft type ever.

The Soviet Air Force, or VVS, was primarily oriented toward supporting troops on the ground, much like the German Luftwaffe. The latter revolutionized mechanized warfare by using Ju 87 Stuka dive bombers to provide relatively precise air support for fast-moving mechanized columns.

But after the initial shock of Stuka attacks early in the war, the slow and lightly armored dive bomber proved excessively vulnerable to enemy fighters and flak. Soviet aeronautical engineer Sergey Ilyushin proposed a Stuka-like plane with a twist — his ground-attack plane would be armored.

Simply bolting on armor plates is liable to make an airplane fly like a brick. Ilyushin’s solution was to make the steel armor an integral load-bearing element of the Il-2’s monocoque fuselage — even though the rear of the aircraft and the wings panels were still made of wood.

After several prototypes, the resulting single-seat Il-2 production aircraft weighed nearly 10,000 pounds, compared to 7,000 for the Stuka, and could carry a similar maximum bomb load of around 1,100 pounds. However, it was slightly faster, at 250 miles per hour, and more heavily armed, with two 20-millimeter cannons in addition to two machine guns in the wings.

Only a small number of Il-2s were deployed to frontline units — notably in the Fourth Aviation Assault Regiment — when the Wehrmacht began its devastating invasion of the Soviet Union on June 1941.

Thrust into a desperate effort to blunt German advancing mechanized spearheads, Sturmovik pilots discovered their armor rendered the Il-2 nearly immune to machine gun fire from the front, and even gave it a chance to survive 20-millimeter cannon shells.

However, the Sturmoviks sustained devastating losses as faster German fighter planes swooped around to hit their unarmored rears. German pilots dubbed the Il-2 the “Concrete Bomber” — a commentary perhaps both on its durability and agility, or lack thereof. During periods of intense fighting, one Sturmovik was being lost for every 10 combat missions, a ratio that would “improve” to one loss for every 26 missions in 1943.

The VVS lost more than 4,000 aircraft of all types in the disastrous first month of hostilities — the Fourth Regiment, for example, lost 55 of its 65 Sturmoviks — and the Il-2 production facilities had to be evacuated east of the Ural Mountains, interrupting deliveries for two months.

Yet as German tanks blazed a trail toward Moscow in the fall of 1941, Stalin found time to personally address this famous telegram to the Il-2 factory managers.

Coming from a man who had given no warning whatsoever to hundreds of thousands of Red Army officers executed for suspected disloyalty, the message must have proven motivational.

More than 36,000 Il-2 Sturmoviks were built over the course of the war, making it the second most widely produced airplane ever. First place goes to the ubiquitous civilian Cessna 172.

Stalin would influence the Il-2 in another manner — after receiving a letter from a Soviet pilot begging for a tail gunner to defend against German fighters, he ordered Ilyushin to switch to two-seater Il-2s.

The Il-2M, introduced in 1942, had an extended canopy to accommodate the gunner of a rear-mounted 12.7-millimeter UBT heavy machine gun. Its wing cannons were also upgraded to high-velocity 23-millimeter VYa types.

Finding a suitable cannon for the Sturmovik proved a contentious process — the designer of one failed cannon prototype, Yakov Taubin, was executed for “plotting the production of inferior-quality weaponry.”

The tail gunners did prove useful in shooting down harrying German fighters. However, they weren’t protected by any armor plating, and suffered four times the fatality rate of the pilots. The additional crewmember and weapon also reduced flight speed and badly unbalanced the airplane by shifting the center of gravity towards the rear.

Nonetheless, such was the desperation of the air war over the Eastern Front then that the Il-2 was frequently called upon to serve as a fighter. While the Sturmovik had no way of keeping pace with German fighters, it proved deadly in taking down slower German bomber, observation and transport planes, resulting in several Il-2 aces.

Indeed, many Il-2 pilots achieved legendary status. Armenian Lt. Col. Nelson Stepanyan is recorded to have sunk 13 German ships singlehandedly, scored 27 air-to-air kills, blasted five bridges and destroyed nearly 700 vehicles on the ground. After being hit in a raid over Latvia in December 1944, he rammed his flaming aircraft into the deck of a German warship.

Anna Timofeyeva-Yegorova, a peasant’s daughter, became squadron commander of the 805th Assault Aviation Regiment and flew 243 combat missions in her Sturmovik before she was blasted out of her plane by anti-aircraft fire in August 1944. She went on to survive hitting the ground with a partially opened parachute, German captivity and its lack of medical care, and finally Soviet officers suspecting her of being a Nazi collaborator.

Air strikes by Sturmoviks would play a major role in crippling the effort to resupply the German Sixth Army trapped in Stalingrad during the winter of 1942–43, destroying 72 German aircraft on the ground at the airfield of Skalsk, and shooting down numerous transports in the air. The Sturmovik’s greatest moment of glory, however, came during the epic Battle of Kursk, popularly remembered as the largest tank battle in history.

The Il-2 disposed of a variety of specialized antitank weapons. It could carry eight 82-millimeter or four 132-millimeter rockets, but despite their excellent armor-piercing ability, they proved too inaccurate to be highly effective. PTAB bomblets carried in underwing dispensers were better because they required less precision — around 200 of the three-pound shaped charges could be deployed like cluster munitions to carpet an area 70 meters long and 15 meters wide with armor-piercing bomblets.

Some Il-2s were equipped with two huge tank-busting 37-millimeter automatic cannons with 50 rounds of ammunition each. However, the cannons’ accuracy was so poor, due to excessive recoil, that production of this type was halted after construction of “only” 3,500 examples.

The Battle of Kursk actually began with one of the largest air battles of World War II, when German fighters scrambled just in time to blunt an enormous preemptive air strike by Soviet fighters and bombers. The aerial melee involved 500 warplanes and resulted in a few dozen German losses in exchange for around one hundred Soviet aircraft.

But Soviet commanders didn’t let the initial setback prevent them from feeding even more Sturmoviks into the battle. Il-2 pilots in Kursk began flying in “Circles of Death” over the battlefield to cover each other’s tails from enemy fighters, one aircraft at a time peeling away to make ground attack runs before rejoining the circle.

During the following weeks of fighting, Sturmoviks and Stukas competed frenetically to knock out the tanks of their adversaries. German airpower, including new Ju-87G Stukas and Hs. 129 attack planes with tank-busting cannons, supposedly single-handedly blunted the advance of the Second Guards Tanks Corp on July 8, knocking out 50 tanks.

The day before, Sturmoviks reportedly destroyed 70 tanks of the German Ninth Panzer Division, halting its advance.

More extraordinary claims were to follow. Sturmovik pilots reported the destruction of 270 tanks in the Third Panzer Division, and 240 tanks of the Seventeenth Panzer Division. Curiously, these two units had only 90 and 67 operational tanks at the beginning of the battle, respectively.

In reality, there is considerable evidence that reports of tanks killed by aircraft were greatly exaggerated by pilots of all nations in World War II. Operational research by teams on the ground tended to find that fewer than 10 percent of tank losses were attributable to air power.

The rockets, bombs and heavy cannons used by ground-attack planes were simply too inaccurate, and most could only penetrate the top armor of a tank, necessitating steep angles of attack.