Looking to Buy a 10mm Gun? Here are the 10 Best Models 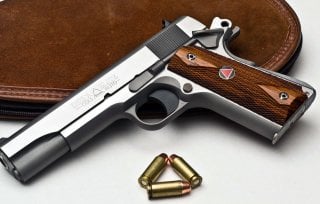 The skeletonized hammer and trigger are simply awesome to behold and the G10 tactical grips further the intimidating look. The durable parkerized coating puts the finishing touch on the design.

1800gunsandammo.com has this top of the line pistol for $780.00 at the moment, leading this writer to make an immediate impulse purchase (you gotta treat yourself sometimes).

Sig Sauer‘s another one of those names like Colt or Remington that stick in the forefront of the gun enthusiast’s mind whenever the subject of handguns comes up.

The P220 is head and shoulders above many of their competitors’ models in that it features SigLite signature night sights for easy target acquisition and a threaded, chrome-lined barrel that provides the gun owner with handgun longevity.

Cabela’s has a very special 40th Anniversary Special Buy edition of this centerfire pistol for just $1,099.99 compared to the standard model’s $1,500.00. It comes with an engraved Nitron slide that’s sweet for serious collectors as well as casual shooters with a bit of money to burn.

The Wilson Combat Classic comes in at number ten on my list because this one is really a vanity item at a whopping $3,799.99. The classic brown wood grip on platinum silver body makes it a favorite among Clint Eastwood fans and the like.

As far as 1911 pistols are concerned, this one is a performance firearm with Wilson’s own low-mounted adjustable rear sight and bullet proof one-piece mag well.

Basically, if you’re in the market for all the bells and whistles, this bad boy might become your best friend. It’s got a countersunk slide stop, reverse crown/flush cut barrel and boasts a flashy Wilson grip medallion.

To reiterate, while this is certainly a worthy option, you’re going to pay big to get your hands on one of these much-coveted trophy ten millis. For more practical, frugal gun enthusiasts, I’d highly recommend any other handgun on this list.

There you go, I hope you’ve enjoyed my guide to the best 10mm handguns out there. By now, you should have a better idea of the specs you should expect from a decent ten milli pistol. Also suggest you guys taking a look at my article on the best range bags to find one can help you safely store your weapon.

At the end of the day, it all comes down to your personal needs and preferences. But this list should serve as a good starter for shooters who are looking to select a beginner pistol.