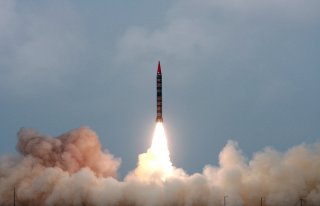 Here's What You Need To Remember: Speaking to the New York Times, some American officials expressed their concern about “new vulnerabilities for Pakistan’s nuclear arsenal, including the potential for militants to snatch a weapon in transport or to insert sympathizers into laboratories or fuel-production facilities.”

Unlike India, Pakistan lacks a sea-based nuclear delivery platform and thus does not have a three-pronged nuclear triad. Worst still for Islamabad, Pakistan is hindered by a lack of cash, and there are questions about how secure the nuclear missiles in Pakistan are from falling into non-state actor’s hands.

Unlike India, Pakistan does not adhere to a no-first-use nuclear policy. That is to say, Pakistan reserves the right to use nuclear weapons first, rather than in retaliation after being struck first. India is Pakistan’s main geostrategic enemy, and their nuclear arsenal exists only to deter India.

A Pakistani military officer, General Khalid Kidwai, mentioned in 2002 what Pakistan’s nuclear use strategy could look like, saying that Pakistan would willingly launch nuclear missiles if the existence of the state was at risk. He outlined the following points that would merit a nuclear response from Pakistan:

So while not completely ambiguous, there is also an element of strategic ambiguity in Pakistan’s policy.

When compared to their neighbor India, Pakistan plays second fiddle. India is “more powerful than Pakistan by almost every metric of military, economic, and political power—and the gap continues to grow,” according to some experts.

This is reflected in Pakistan’s nuclear arsenal, which unlike the India triad of land, air, and sea-based delivery, can only deliver payload from land, via ballistic missiles, or from the air, via jet bombers.

In contrast to India, the majority of Pakistan’s nuclear arsenal is made up of “short and medium-range ballistic missiles,” though it has made significant progress in “developing cruise missiles.”

One of the concerns regarding Pakistan’s arsenal is not how destructive it could be, but rather how insecure it may be.

An on-again, off-again Taliban insurgency in the Afghanistan-Pakistan border regions, as well as home-grown militant groups have raised alarm bells in Washington previously. Part of the worry is that the United States does not know for certain the exact location of all of Pakistan’s nuclear weapons.

Speaking to the New York Times, some American officials expressed their concern about “new vulnerabilities for Pakistan’s nuclear arsenal, including the potential for militants to snatch a weapon in transport or to insert sympathizers into laboratories or fuel-production facilities.”

Because of these concerns, the Obama administration had continued a Bush-era program reportedly worth $100 million to aid Pakistan in securing the physical protection surrounding its nuclear arsenal, and to help train up the security services that guard Pakistan’s nuclear facilities.

…it may matter little that Pakistan’s nuclear capabilities are significantly less capable than those of their geostrategic rival, India. Still, better not to take any chances.

Caleb Larson is a defense writer for the National Interest. He holds a Master of Public Policy and covers U.S. and Russian security, European defense issues, and German politics and culture. This article first appeared several years ago.