Low Cost, Big Bombs: Why the Old B-52 Is Dodging Retirement 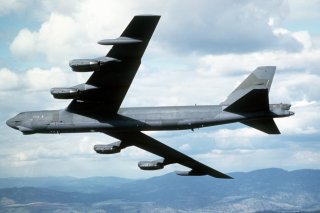 Here's What You Need to Remember: The plan is to dedicate two airframes to each area targeted for upgrade: engines, radar, bomb bay improvements, and connectivity. By having two airframes dedicated to each upgrade aspect, the Air Force hopes to avoid any testing delays that could arise and implement upgrades as quickly as possible.

These most recent planned upgrades fall into four categories: engines, radar, communications, and weapon capacity. To finance these improvements, the U.S. Air Force has already spent $1.4 billion, and is prepared to drop an additional $3.8 billion spread out over the next five years, with even more money potentially ready to be invested into the airframes after the five-year mark.

Once implemented, these upgrades will allow the B-52 platform to outlast several newer airframes, including the B-2 Spirit stealth bomber and the variable geometry B-1 Lancer. After those two airframes are retired sometime in the 2030s, the Air Force would presumably operate just two bombers, the B-21 Raider stealth bomber and the B-52.

Another significant upgrade will install the Combat Network Communications Technology, or CONECT communications upgrade. The upgrade will completely overhaul and replace a number of various styles of band-aid solutions. This included laptop computers, connecting wires, and, strangely enough Post-it notes. B-52s will get new digital color displays and improved onboard processes with greater computational power.

Keeping America’s Mighty B-52 Bomber Lethal for the Future