The Loyal Wingman Drone Could Change the Future of War 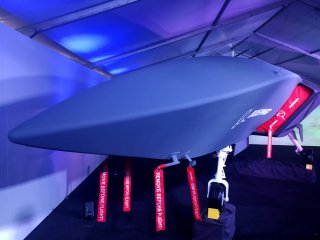 Here’s What You Need to Remember: The idea is that a drone could fly ahead of a manned fighter in the most dangerous environments, locating and attacking targets without exposing a human pilot to potential harm. Likewise, a drone wingman could act as a flying munitions magazine for traditionally-piloted aircraft, with the robot firing its weapons at targets the human pilot selects.

The armed wingman drone Boeing is developing for Australia has powered up for the first time. The Australian air force is a little closer to flying into battle with mixed formations of manned and unmanned fighters.

The Chicago plane-maker’s Australian subsidiary announced the milestone on April 9, 2020. “The development milestones for the unmanned aircraft come just weeks after completion of the first fuselage, allowing for rapid progress on systems installation and functional and integration testing from the aircraft's own landing gear,” the company stated.

Australia’s Airpower Teaming System is one of several wingman drones in development around the globe. Boeing revealed the 38-feet-long “loyal wingman” at the Australian International Airshow at Avalon in February 2019. The drone has the distinctive, sharp angles of a radar-evading stealth aircraft.

But the most novel part of the Airpower Teaming System is invisible. Algorithms and radio datalinks allow human operators aboard manned planes or on the ground to command the highly autonomous drones.

“The software and advancement of the technology itself will matter greatly, but so will the concept of how it operates, how it teams with the human, how much leash is given,” P.W. Singer, author of Ghost Fleet and Burn-In: A Novel of the Real Robotic Revolution, told The National Interest.

“The visions for the future range from the human controlling everything to them being equivalent to a quarterback calling pre-determined plays to a true equivalent wingman a la Mav and Iceman [from Top Gun] to, why do you need a wingman when a swarm might do the job?” Singer added. “Which wins out, not just in our own plans and buys, but in battle is yet to be determined.”

“In terms of difference it could make, If history is any guide, it could well decide a future war.”

The U.S. Air Force Research Laboratories launched its own Loyal Wingman drone effort back in mid-2015 with a formal request for information to the aerospace industry. “Autonomy technologies can enhance future operations and capabilities in contested and denied environments,” the RFI explained.

“Technologies are also required to seamlessly integrate the pilot and his/her aircraft with the autonomous unmanned aircraft to allow them to operate as a team for combat effectiveness.”

The idea is that a drone could fly ahead of a manned fighter in the most dangerous environments, locating and attacking targets without exposing a human pilot to potential harm.

Likewise, a drone wingman could act as a flying munitions magazine for traditionally-piloted aircraft, with the robot firing its weapons at targets the human pilot selects.

The Air Force folded the wingman-drone technology into a wider artificial-intelligence program it calls “Skyborg” and selected Kratos’s Valkyrie drone to host the capability. Prototypes began flying in mid-2019. The U.S. air arm wants to begin fielding its wingman drones in the early 2020s.

"We're continuing at pace toward our goal of flying later this year, so that we can show our customer and the world what unmanned capability like this can do," Shane Arnott, Boeing’s Airpower Teaming System program director, said in a statement. "The strong contributions from our industry team are powering our progress."