The M2 Bradley Was Designed For All Terrain: Including Nuclear Wasteland. 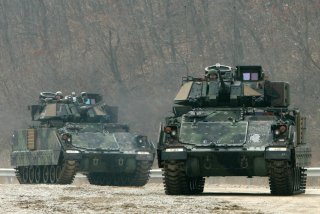 Here's What You Need To Remember: Lightly armed and armored, the M113’s sole job was to transport infantry to the edge of battle, whereupon they would dismount and attack on foot. As the Soviets pointed out, however, the slow pace of dismounted infantry attacks virtually invited tactical nuclear weapons.

Soviet tanks had natural protection against the heat and blast of a nuclear weapon, but Soviet infantry in their open-topped armored personnel carriers was vulnerable. The result was the boyevaya mashina pekhoty (BMP), or infantry fighting vehicle (IFV). The BMP could carry an entire infantry squad and was armed with a seventy-three-millimeter gun launcher and AT-3 Sagger antitank missile. Infantry traveling inside could even shoot their AK-47 rifles through portholes on the side—although they rarely if ever did. Rather than dismounting during attacks, the Red Army infantry would fight mounted, and thus advance across the battlefield quickly—too quickly to be bracketed by tactical nuclear weapons.

At the same time, the U.S. Army staked out a requirement for a new Armed Reconnaissance Scout Vehicle to equip scout platoons and armored cavalry regiments. In a cost-saving move, the Army decided to merge the IFV and ARSV programs into a single vehicle with both infantry fighting vehicle and scout vehicle variants. Here was another dilemma: an IFV with a manned turret would stand tall—taller than a tank—and stand out on the battlefield. The ARSV, on the other hand, would be better served by a low-profile vehicle: the better to observe the battlefield undetected if necessary.

Eventually, the M723 was accepted for production and the resulting vehicle became known as the Bradley Fighting Vehicle, with two variants, the M2 Infantry Fighting Vehicle and the M3 Cavalry Fighting Vehicle. Although the M2 and M3 originated from different sets of requirements both vehicles appeared identical from the outside. While this has generally worked out—in the thirty-six years since production began, none of the forced design compromises on either vehicle has proven a show-stopper—one can’t help but wonder what would have happened had the Army designed two different vehicles.