The M2 Machine Gun is Here to Stay 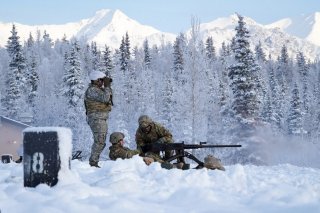 Here's What You Need to Know: The ruggedness and versatility of the M2 Browning keep it a favorite of soldiers in practically every conflict since its inception.

However, a few decades later, quick-change barrels were becoming the norm. The German MG34 and MG42 that the M2HB faced in World War II both used quick change barrels that could be swapped extremely rapidly. During the Cold War, the Soviets used .50 caliber machine guns (in their own 12.7 x 108 millimeter caliber). The Soviet NSV was lighter than the M2HB, and featured a quick change barrel.

Image: Creative Commons "A Soldier spots targets downrange as two of his Soldiers fire an M2 machine gun" by #PACOM is licensed under CC BY-NC-ND 2.0