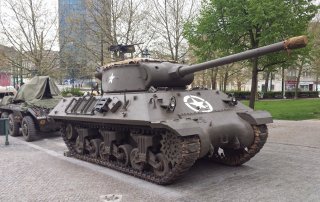 Here's What You Need to Know: American forces fielded several variants of the M36 tank destroyer and gradually incorporated improvements into the design, including a travel lock that kept the main gun in place, as well as a large muzzle brake at the end of the gun that reduced recoil.

Thanks to a massive 90mm main gun, the M36 was one of the few American tank destroyers that could reliably engage any German armored vehicles, even at extreme distances.

During the Second World War, American tank doctrine called for U.S. tanks to engage and defeat any enemy tanks they came up against. And while American tanks, and the venerable Sherman in particular, were generally well equipped to take on most German tanks, the United States lacked a force specifically equipped to counter massed armored maneuvers — until the advent of the Tank Destroyer Force (TDF).

The TDF’s purpose was to counter German armor breakthroughs wherever they occurred. To that end, American tank destroyers were to be very mobile and very heavily armed. These design requirements produced several tank destroyers that while faster than tanks like the Sherman, were more lightly armored. Tank destroyers, therefore, relied on speed and surprise when engaging enemy armor formations. Rather than using a robust armor package for defense, tank destroyers instead relied on their relatively high top speed to escape from danger.

The M36 was the epitome of these design principles: it mounted a massive 90mm main gun as well as a .50 caliber heavy machine gun. The M36’s main gun was one of the United States' few weapons that could be relied upon to engage even heavy German tanks from extreme distances. Several sources point to several engagements against German armor from over 4,000 yards that ended in American victory.

The M36 tank destroyer’s hull was a converted M10 hull, an earlier American tank destroyer, and was broadly reminiscent of the Sherman tank. One of the M36’s few critiques was its rather modest armor package and to some extent the tank destroyer’s speed.

American forces fielded several variants of the powerful tank destroyer and gradually incorporated improvements into the design, including a travel lock that kept the main gun in place, as well as a large muzzle brake at the end of the gun that both reduced recoil and prevented airborne dust and dirt from obscuring the crew’s field of vision after firing.

After the end of World War II, the United States retained the M36, as the platform had proven to be useful even against German Panther and Tiger I tanks, and to a more limited extent against the late-war Tiger IIs. The United States fielded the powerful tank destroyer during the Korean War as well, where the platform excelled: the M36 was capable of engaging and destroying any Soviet armored vehicles it came up against.

Post-war, the M36 was widely exported abroad and experienced combat with the French during the First Indochina War, as well as during the Indo-Pakistan War of 1965. Some M36s were in service as late as the early 1990s during the breakup of Yugoslavia.