Macchiavelli Has Some Advice for America's Iraq Strategy 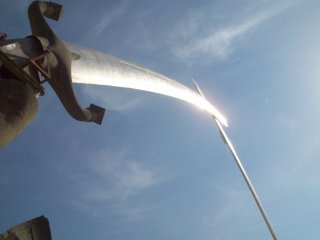 Here's What to Remember: "A student of classical Roman history, Machiavelli used the Roman experience, primarily as related in the histories of Titus Livy, to instruct princes and republics on how to found and maintain regimes. A product of the cutthroat politics of Renaissance Florence, he was no stranger to the harsh methods seemingly required in Iraq. His Discourses on Livy provides a rich fund of insights for the Middle East, where his brand of pure power politics still flourishes."

The resilience of the insurgency that has bedeviled the construction of a republican Iraq confronts the transitional Iraqi government with a quandary: whether to crack down ruthlessly on hotspots such as Fallujah or trust to milder measures to restore civil order. Understandable criticism has greeted Prime Minister Iyad Allawi's announcements that his government might resort to martial law, curfews and other restrictions of civil liberties in selected locations.

As the months since the fall of Saddam Hussein have shown, subduing the insurgency will be an arduous process, with high-profile setbacks and violence accompanying every step forward. To help frame strategy in such a fluid environment, Allawi should consult the writings of Niccolo Machiavelli, one of the forefathers of realism. Best known as the author of The Prince, Machiavelli was a keen student of the foundation and maintenance of regimes.

His prescription for the founder of a regime: do away with opponents of the new order--by whatever means necessary. "Whoever takes up the governing of a multitude, either by the way of freedom or by the way of principality, and does not secure himself against those who are enemies to that new order makes a state of short life."

A student of classical Roman history, Machiavelli used the Roman experience, primarily as related in the histories of Titus Livy, to instruct princes and republics on how to found and maintain regimes. A product of the cutthroat politics of Renaissance Florence, he was no stranger to the harsh methods seemingly required in Iraq. His Discourses on Livy provides a rich fund of insights for the Middle East, where his brand of pure power politics still flourishes.

To make his point about eliminating enemies of a new regime, Machiavelli recounted Livy's tale of Brutus and his sons. "As the history shows," he observed, the sons "were induced to conspire with other young Romans against the fatherland because of nothing other than that they could not take advantage extraordinarily under the consuls as under the king, so that the freedom of that people appeared to have become their servitude."

In short, the sons of Brutus set out to subvert republican institutions because they couldn't turn these institutions to their personal advantage--much as Abu Musab Zarqawi, his jihadi followers, and the remnants of Saddam's regime want to forestall the emergence of a government in Baghdad that would curtail their own pursuit of power.

This dynamic left a fledgling regime in an uncomfortable predicament: "a state that is free and that newly emerges comes to have partisan enemies and not partisan friends." Those who had profited by the old order became implacable foes of the new order, while those inclined to favor the new order hedged their bets against a return of tyranny, taking a wait-and-see attitude until the republican regime managed to consolidate its hold on power.

In short, the new regime faced determined opposition while enjoying only tepid support. It had to vanquish its opponents in dramatic fashion to win the wholehearted support of the populace. "If one wishes to remedy these inconveniences and…disorders," maintained Machiavelli, "there is no remedy more powerful, nor more valid, more secure, and more necessary, than to kill the sons of Brutus."

Brutus not only sat in judgment over his sons but presided over their execution--sending an unmistakable message to Rome's domestic opponents.

Against this example from classical Rome, Machiavelli juxtaposed a contemporary case: that of Piero Soderini, the gonfalier, or head of the ruling Signoria, in Renaissance Florence. Soderini had thought to woo his enemies to his side through mild treatment, believing "he would overcome with his patience and goodness the appetite that was in the sons of Brutus for returning to another government."

It didn't work, leading Machiavelli to conclude that "malignity is not tamed by time or appeased by any gift." However beneficent Soderini's intentions, a republican leader "should never allow an evil to run loose out of respect for a good, when that good could easily be crushed by that evil." Soderini should have struck mercilessly at his adversaries, trusting that "everyone could certify that what he had done was for the safety of the fatherland and not for his own ambition."

The victorious leader should then arrange things so that "a successor of his would not be able to do for evil what he had done for good."

What of today's Iraq? Judging from the Discourses on Livy, Machiavelli would counsel Prime Minister Allawi and his lieutenants to move aggressively against those who are seeking to thwart their efforts to build a new Iraq--to kill the sons of Brutus, as it were. The likes of Zarqawi cannot be appeased, and any attempt by the transitional government to do so would only drag out the fighting while discrediting the government in the eyes of Iraqis.

Having extinguished the insurgency, Iraq's interim leaders can then devise laws and institutions to assure that the sword does not become a routine arbiter of Iraqi politics.