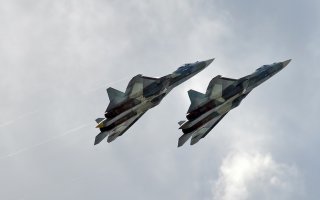 It looks like the next generation bad guy jet in Top Gun: Maverick will be Russia’s stealthy Su-57.

The long-awaited Top Gun: Maverick may be delayed until next year due to the coronavirus, but its toy lines are still moving ahead at full steam. Among the long list of licensed Top Gun toys and memorabilia you can pick up in the toy section of your local grocery store is a Matchbox line of aircraft models from the movie; complete with an F-14 Tomcat, F/A-18 Super Hornet, F-35B Joint Strike Fighter, and interestingly, two other models that don’t share names with any real aircraft.

Of course, the Top Gun films are no stranger to fictional fighters. The original film, which was released in 1986, saw Maverick (the movie’s protagonist) squaring off with MiG-28s, which were depicted as smaller and more maneuverable fighters than Maverick’s F-14. The MiG-28, however, doesn’t exist and was instead played by Northrop F-5s. You can read our full breakdown about how these real U.S. Navy fighters became fake Soviet bad guys in the original movie here.

When the original Top Gun was released back in 1986, CGI wasn’t an option, so the filmmakers had to use real aircraft in a lot of their footage. Today, however, computers can be used to create anything the director envisions — allowing the fictional aircraft in Top Gun: Maverick to look every bit as real as the actual fighters the U.S. Navy operates. So what fictional fighters can we expect in Maverick’s next outing? Let’s start with the fighter that will likely serve as the film’s antagonist and appears to be based on one very real Russian aircraft.

You may be surprised to learn that the original Top Gun never actually identified the nation they were flying against. Because the film took place during the decades-long staring match between the United States and the Soviet Union that we call the Cold War, most simply assumed the “bad guys” were the Soviets. Thanks to getting a peek at this Matchbox “Enemy Strike Jet” from the film, it now seems like a pretty safe bet that the bad guys in the new movie will be the Russians as well. How can I be so sure? Well, for starters, the Top Gun toy bears a striking resemblance to Russia’s now infamous Su-57; the nation’s first “stealth” fighter.

The Su-57 was a logical choice for the new Top Gun for both Hollywood and real-life reasons. The Su-57 is one of only two stealth fighters that exist outside of the hangars of America and its allies that could really heighten the stakes of the film. China’s J-20, the only other stealth fighter Top Gun: Maverick could have featured, would be an unlikely choice — seeing as the movie has already made changes to appease Chinese audiences. It seems far more likely that this movie will paint Russia as the villain — in order to ensure the film is released in Chinese markets.

Russia’s first 5th generation fighter is often compared to America’s F-22 and F-35 in discussion, despite the Su-57’s comparably tiny total numbers (only a dozen or so Su-57s even exist). Russia has begun serial production of the fighter, however, so it stands to reason that Moscow will eventually have a respectable fleet of stealth jets.

While America’s 5th generation fighters rely on stealth and situational awareness to win a fight, the Su-57 takes a slightly different approach. Western experts have long suggested that Russia lacks the ability to mass-produce aircraft with the tight production tolerances required for a truly stealth aircraft. Seemingly aware of their shortcomings, Russia designed their Su-57 to leverage stealth, but to operate more like their highly successful fourth-generation intercept and air superiority fighters.

The Su-57 may not be a real match for America’s best air superiority fighter, the F-22 Raptor, but it is the only stealth fighter on the planet with true 360-degree thrust vectoring capabilities. Thrust vectoring allows the pilot to orient the outflow of the jet engine independent of the aircraft itself, which means the jet can point in one direction while actually flying in another. Its acrobatic capabilities, coupled with its low observability, would make the Su-57 a real threat to fourth-generation aircraft like Maverick’s F/A-18 Super Hornet shown in the trailer.