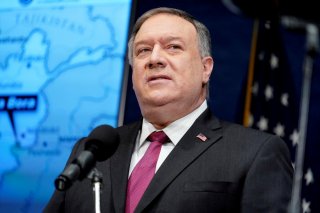 Amid all the sound and fury accompanying US domestic politics – and particularly the recent attack on the Capitol in Washington, two developments in the Persian Gulf have highlighted one of the major foreign policy issues facing president-elect, Joe Biden, when he takes office on January 20: how to deal with Iran.

The Pentagon’s recent deployment of two additional B-52 bombers to the Persian Gulf on January 7 was followed a day later by the inauguration by Iran’s Revolutionary Guard of a new strategic missile base capable of “resisting against enemies’ electronic warfare equipment”.

The insistence of US foreign policy officials that Iran is an implacable foe is of course not new: as former State Department and National Security Council officials David Benjamin and Steven Simon point out, successive post-Cold War national security strategies have consistently depicted Iran, above all others, as the archetypal enemy.

As such, policymakers have consistently implemented strategies entailing stringent unilateral sanctions, diplomatic isolation and belligerent rhetoric in order to curb its behaviour, but perhaps more broadly, as part of a wider quest for regime change.

Most recently, we have seen this through Donald Trump’s “maximum pressure”, which Secretary of State Mike Pompeo insists is about helping the Iranian people “change course”.

By equating the threat posed by Iran to that of the Soviet Union during the Cold War, the United States continues to waste superfluous material resource and diplomatic capital which could otherwise be expended on more salient foreign policy issues.

Over the past few decades, Iran has proved its capacity to survive intense diplomatic and economic strangulation. So why does Washington still insist on wasteful, expensive measures in the hope of breaking the theocracy? The policies it has chosen and continues to choose are curious, not because of unconventionality, but because they persist despite repeated failures.

Trump’s withdrawal from the Joint Comprehensive Plan of Action (JCPOA) – better known as the 2015 Iran nuclear deal between Iran and the P5+1 (the UN Security Counucil’s five permanent members plus China) – rested on the assumption that the agreement “failed to guarantee the safety of the American people from the risks created by the leaders of the Islamic Republic”.

Instead, Trump’s maximum pressure campaign aimed to force Iran to the negotiating table as it faced the risk of going bankrupt or capitulating to Washington’s demands. Unfortunately, this assumption also refused to acknowledge Iran’s ability to resist sanctions measures and retaliate with pressures of its own.

Iran’s answer to Trump comes in the form of maximum resistance. Leadership in Tehran is swayed by the idea that regional escalation and nuclear non-compliance are more profitable than compliance and restraint. Rather than render itself bankrupt, Iran has sought to capture America’s attention with new military escalations, managing the threat to oil flow in the Gulf and gradually moving away from the JCPOA by resuming uranium enrichment.

Iran’s supreme leader, Ayatollah Ali Hosseini Khamenei, has stated that the solution to western pressure was to develop an “economy of resistance” to lessen the country’s reliance on oil revenues. While this has not protected Iran from external shocks such as oil price fluctuations and sanctions, the country’s economy has made some modest gains. Production of steel, aluminium, copper and electricity has hugely expanded. Iranian tactics aim to promote self-reliance – in a nutshell, it’s business as usual.

Not only has Trump’s strategy failed to bring Iran to the negotiating table, the Pentagon’s deployment of nearly 3,000 additional troops to the region as well as an extra squadron of fighter planes to Saudi Arabia puts American personnel at risk.

Tehran continues to launch attacks on American diplomatic missions and Iraqi military bases, as seen in the Iranian-backed militia’s rocket attack on the US embassy compound in Baghdad in December. It is precisely this that makes Iran a threat to the United States.

Washington risks standing alone in its view that Iran is an irrational “rogue” state and it’s increasingly evident that many of America’s allies – namely those in Europe – are unhappy about unilateral action from the US. There is a growing sense that America is seen as the provocateur and they rightly worry that its strident reactions could provide a pretext for unnecessary conflict.

This deeply rooted mantra that Iran poses an existential threat to international security is one that must be firmly hauled out. Washington must seek to engage Tehran through rigorous multilateral diplomacy by rejoining the JCPOA in exchange for sanctions relief so as not to damage the relationship or destabilise the region even more. It must work collaboratively on areas of mutual interest such as regional crises in Syria and Yemen as well as the threat posed by ISIS. Iran must also be engaged on transnational issues such as climate change, public health and disease surveillance.

The future path of US-Iranian relations will not be a linear process, and obstacles will persist, but a gradual transition to a more cooperative relationship would almost certainly better serve US interests. While Iranian actions currently demonstrate a clear breach of the nuclear deal, this is only a reminder of what will likely be the new trajectory if the JCPOA is not restored.

This is not to say that all fears are unjustified or that all threats foster irrationality, but overreactions to insignificant threats more often than not result in serious strategic consequences.

The recent turmoil in Washington demonstrates that perhaps the most prominent threat to the United States is closer to home than we think. It’s time to start thinking about contemporary global challenges without using archaic paradigms of the past.