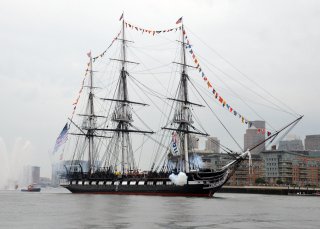 Here's What to Remember: The ship has remained in service, though sometimes in dry dock for repairs or maintenance, for 225 years.

On Friday, US Navy Cmdr. Billie J. Farrell made history as the first woman to take command of the Navy’s oldest commissioned ship, the legendary USS Constitution.

Farrell, 39, is the 77th commanding officer of the wooden-hulled heavy frigate, which first launched in October of 1797. The vessel would go on to earn fame, as well as its nickname, in the Battle of 1812. The USS Constitution was credited with defeating as many as five British warships during the conflict, one of which was the frigate HMS Guerriere. When Guerriere opened fire on the American ship, cannonballs were seen bouncing off its hull, earning it the longstanding nickname of “Old Ironsides.” The ship would go on to earn an incredible 33-0 engagement record, having never lost a fight.

“I am honored to have the privilege to soon command this iconic warship that dates back to the roots of both our nation and our Navy and to have been afforded the amazing opportunity to serve as USS Constitution’s first female commanding officer in her 224 years,” said Farrell in a Navy release.

“I hope to strengthen the legacy of USS Constitution through preservation, promotion and protection by telling her story and connecting it to the rich heritage of the United States Navy and the warships serving in the fleet today.”

The ship has remained in service, though sometimes in dry dock for repairs or maintenance, for 225 years, but until this past week, only men have served as the ship’s commander. In December of 2020, Capt. Amy Bauernschmidt was selected as the US Navy’s first-ever commander of a nuclear aircraft carrier, marking another in a series of historic firsts for female leaders across the force. With women leading the way aboard some of America’s most advanced and powerful vessels, it seems only fitting that a woman should take command of the force’s most storied and legendary of ships.

“I feel honored to have been chosen as the first female [commanding officer] and blessed to be in this role,” she said in an interview with The Globe.

“I just really want to show that if somebody wants to do something within the Navy or elsewhere that there [are] always opportunities, and you just have to find them and work hard and set your sights on something and continue to push forward.”

When asked by CBS News correspondent Nancy Chen what she would tell her younger self about being given command of the Constitution, Farrell replied with the sort of hard-working humility that is characteristic of many seasoned Navy leaders.

“Even if I told her that one day she would be commanding the ship, she wouldn’t believe me,” Farrell said. “I think I would just tell my younger self to keep doing your best, and you’ll find yourself in some unusual places.”

Related: Women in the military: Paving the way and shooting for thestars… literally

Farrell, a graduate of both the U.S. Naval Academy and the University of Arkansas, previously served as the executive officer aboard the Ticonderoga-class guided-missile cruiser USS Vicksburg (CG 69). Her career spans a number of cruisers before that, from her first tour as an electrical officer aboard the Ticonderoga-class USS Vella Gulf (CG-72) to serving as both a Weapons Officer and Combat Systems Officer aboard the USS San Jacinto (CG 56). She holds a master’s degree in Operations Management and her previous awards include two Meritorious Service Medals, four Navy and Marine Corps Commendation Medals, and three Meritorious Unit Commendation Medals.

“This is an exciting time in Boston with a female mayor and a female captain for Old Ironsides. Women have been represented in Constitution’s crew since I joined the museum staff in 1986, and the first female officer came aboard in 1996.”

While Farrell is the ship’s first female commander, she’s not the first woman to lead Sailors on its deck. In 1997, the USS Constitution was brought out of dry dock to sail under her own power for the first time in 116 years. That historic voyage was overseen in part by the ship’s first commissioned female officer, Lt. Cmdr. Claire V. Bloom, who served as the vessel’s executive officer.