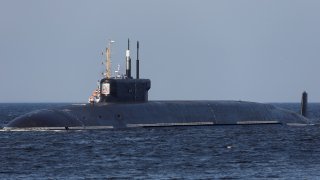 Here's What You Need to Know: It is estimated that a total of five of the improved Borei-II-class submarines will ultimately be built.

The Borei-II-class as this class is tentatively called, is the first from-scratch Borei-class design—the original Borei-class was built using unfinished hull sections from other submarines. Check out why it is so advanced.

In 2020, Russia’s Sevmash Shipyard christened their latest product, a Borei-II-class submarine, as the Knyaz Vladimir. It was named after Vladimir the Great and promptly put into the Russian service. The large submarine’s entry into Russian service had been postponed at least once due to the discovery of “shortcomings,” according to the Russian state media agency TASS.

Despite the so-called shortcomings, the Sevmash Shipyard CEO was quoted as saying, “The construction of the Knyaz Vladimir confirmed our best shipbuilding traditions based on the excellent work and high responsibility of scientists, designers and shipbuilders.” He emphasized the submarine’s future utility, outlining that “the submarine is a new event in the line of strategic submarines and has improved characteristics.”

Indeed, the Borei-II-class, as the class has been termed, is expected to be the Russian Navy’s go-to strategic nuclear submarine class for at least several decades. Each submarine will carry a remarkable 16 Bulava ballistic missiles. These missiles are thought to be nuclear-capable only and have an estimated range of 8,300 kilometers, or over 5,100 miles. They are thought to have good accuracy, comparable to other western ballistic missiles. This neat video, showing a Bulava test launch, is worth the 2.5-minute watch.

While the original Borei-class were built rather haphazardly, using hull sections from both the Akula-class and Oscar-class submarines, the Borei-II-class is a genuine from-scratch build. Rather than compromising the design using scraps from uncompleted submarines, the Borei-II-class will likely benefit from directly following the engineer’s intent.

Uniquely, the Borei-II-class seems to break from traditional Soviet submarine design and has opted for a western-style vertical rudders. The sail, along with the rear tail assembly configuration also appears to follow more of a western design philosophy.

One expert explained why the Borei-II-class is an improvement compared to its predecessor, saying “In comparison to the Borei-class, Borei II-class submarines are fitted with four additional missile tubes, boast smaller hulls and cons, and feature improved acoustics and lower sound levels, next to a number of other technical improvements.” Not only are they better armed, they’re quieter too.